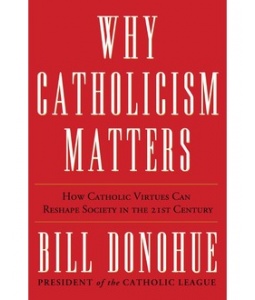 A monumental occurrence in the history of this blog happened recently...I got a free book that a publisher was hoping I might review on the blog and recommend if I found it to be good.  Of all the things that have happened since I started blogging, receiving a free book has perhaps been the most joyous of all the surprises!

The book is "Why Catholicism Matters - How Catholic Virtues Can Reshape Society in the 21st Century."  The book is written by Bill Donohue, who is the president of the Catholic League.  Some are likely smiling who have seen Bill Donohue in action before - "of course they would ask Fr. Hollowell to review this book...both Fr. Hollowell and Bill Donohue are "angry, unkind, uncharitable, and (did I mention already) angry Catholics!"

I've seen Bill in action before, mostly on television news shows.  Bill is typically brought in when they want someone who is direct, loud, and unabashedly Catholic.  I must admit that there have been times where I have winced while watching Bill as I've thought to myself "perhaps that could have been said more compassionately", but then again, I also note the irony some will see in me thinking someone should perhaps be less brash.  That being said, I've NEVER found fault with anything Bill has said; he is a passionate and ardent Catholic, he loves the Church, he knows his stuff, and, given the absolutely insane times we are living in, is Bill really speaking in a manner that would be different from the prophets?

Regardless of where one stands on Bill Donohue, I think most Catholics would really enjoy his latest book "Why Catholicism Matters".  Donohue, who offers typically (and understandably) pessimistic commentary on what is BROKEN with the world, has instead structured this work around what can be done in a positive sense.  To rephrase, instead of noting problems, he offers solutions.

The book is structured around the 4 Cardinal Virtues (Wisdom, Justice, Temperance, and Fortitude) and he spends the entirety of the book looking at how to apply them in today's culture.

In the introduction, Donohue says that the book is looking at the positive question that has consumed the philosophers since Aristotle - "How do we create the good society."  As with Aristotle (and many cultures since the Greeks) the answer is that society has to inculcate (both among its individuals and also among the group as whole) the Cardinal Virtues.

I found this phrase in the introduction to be indicative of Donohue's entire book - "It is not good enough to say that we must thwart those behaviors proscribed by the Ten Commandments; we need to know what to prescribe.  That's where virtue comes in.  In other words, the Ten Commandments tell us what not to do; virtue tells us what to do."  Beautiful!

As Donohue sets out on his project, it becomes clear that this a work of serious scholarship.  Donohue breaks from the mold that many would box him in - he brings in lots of sociological studies and research from outside the "Catholic bubble" (much like Mary Eberstadt's "Adam and Eve Before the Pill").  Not that there is anything wrong with the Catholic bubble, but Donohue shows intellectual versatility in his ability to bring in sources from a wide range of academia.

Through his exposition on the 4 Cardinal Virtues, Donohue spends a lot of time looking at the all-important questions from history put to the Church (slavery, the Inquisition, the Crusades, art, science, freedom, stem cells, abortion, pornography, the priest abuse crisis, the sexual revolution, Humanae Vitae, the state of marriage today, etc.) while also looking at ways to apply the virtues within ourselves and the society we find ourselves in now.

I found the book to be a REALLY important work (not just because I got a free copy!).  Donohue seamlessly accomplishes two equally important tasks for Catholics today - he examines events from the past and looks to defend those events from the "remaking" that they often undergo in the mainstream media, while at the same time not staying in the rut of simply dwelling on the "woe is us Catholics" who are always victimized by the media; he spends quality time looking forward to possible solutions and possible ways for reshaping our society.

Donohue, typically accused of hyper-pessimism, has written a book that can fairly be described as optimistic.  There is none of the typical "the world is going to Hell in a hand basket" that one has perhaps come to expect from Donohue.  I would highly recommend this book to anyone, and I think it would be a great read for even high school and college aged young people looking to quickly become knowledgeable on things Catholic.  It will be an indispensable book for me, and one that I think I'll be handing out often to those with questions on the Church past, present, and future.

If you check the book out and read it, leave a comment here or drop me a line and let me know how you found the book.
Posted by Father John Hollowell at 9:58 AM