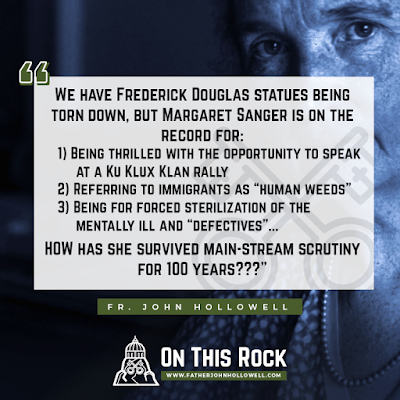 Saint Paul: “We know that all creation is groaning in labor pains even until now; and we also groan within ourselves as we wait for the redemption of our bodies.”

Translation: We are waiting on Christ’s return, and the world is in turmoil until what we are waiting for happens, when Christ returns at the end of time.

In this homily, I hope to establish 3 things.

1) The Catholic Church could not speak more strongly against racism

2) I want to talk about a racist antiimmigrant who has miraculously escaped mainstream scrutiny for 100 years.

3) And then in conclusion I want to note that a saint has noted that as long as abortion is legal, we can’t expect anything other than violence and turmoil

1) In our own day, lots of people are rightly upset about racism.  The Catholic Church has ALWAYS been against racism, and can’t say it more strongly.  We’ve been against it since the first chapter of Genesis, since God said we are all made in God’s image and likeness

A sampling of teachings through the centuries: since all people have the same dignity as creatures made in his image and likeness…Since something of the glory of God shines on the face of every person, the dignity of every person before God is the basis of the dignity of persons before other persons. Moreover, this is the ultimate foundation of the radical equality and brotherhood among all people, regardless of their race, nation, sex, origin, culture, or class.

Elsewhere (just 2 of thousands of places) “For those who live a new life in Christ, racial and cultural differences are no longer causes of division”

Has every Catholic lived that belief perfectly – absolutely not.  Some today are pointing to the sins of the past, of the Church, Christianity, etc. and we own all of that.  But Catholicism should not be judged by the people who don’t live the faith out.  Hitler, and Mussolini were baptized Catholics.  Yet no one judges Catholicism by those two.

2) So, as we have riots going on around the country about racism, I’d like to talk about the racism of seemingly the one person who has not been targeted: Margaret Sanger who would eventually become the founder of Planned Parenthood.  I’d like to give you a few quotes than because this is probably the most under-reported story of the last 100 years, and I want you to ask “why are we not hearing about these things”

You don’t have to go back through decades of obscure tweets, rereading with a fine tooth comb old social media posts.  These are all in her short, accessible, writings.

In a letter to Dr. C.J. Gamble “We do not want word to go out that we want to exterminate the Negro population and the minister is the man who can straighten out that idea if it ever occurs to any of their more rebellious members.”

In a letter concerning the Negro Project she founded in 1939 we read: “The project would hire three or four ‘colored Ministers, preferably with social-service backgrounds, and with engaging personalities’ to travel throughout the South and propagandize for birth control, since ‘the most successful educational approach to the Negro is through religious appeal.’ .

Sanger spoke at a Ku Klux Klan rally in 1926 in Silver Lake, New Jersey. Following the invitation, Sanger describes her elation after receiving multiple speaking requests from white supremacy groups. She writes of the experience on page 366 of her book, An Autobiography:

“I accepted an invitation to talk to the women’s branch of the Ku Klux Klan … I saw through the door dim figures parading with banners and illuminated crosses … I was escorted to the platform, was introduced, and began to speak … In the end, through simple illustrations I believed I had accomplished my purpose. A dozen invitations to speak to similar groups were proffered.”

Do we have a documented case of someone proud to have spoken at a Klan rally who still has streets and awards named after her, and statues still standing?  We have statues being pulled down of Frederick Douglas and Abraham Lincoln, but Sanger’s legacy has remained unquestioned for the past 100 years?  How is that possible?

A sampling of her statements on immigrants:

“There were 1.6 million illiterate foreigners in the United States when the 1910 Census was taken.  Do these elements give promise of a better race?  Are we doing anything genuinely constructive to overcome the situation?”         Women and the New Race

“Civilized nations are penalizing talent and genius, to coddle and perpetuate the choking human undergrowth, which, as all authorities tell us, is escaping control and threatens to overrun the whole garden of humanity.”  Pivot of Civilization

“We are paying for, and even submitting to, the dictates of an ever-increasing, unceasingly spawning class of human beings who never should have been born at all.”

She uses “feeble minded” seemingly 2,000 times.  It is chilling.  She means, one can assume, all those not as smart as her, those suffering mental illness and she makes the case, over and over again, that “the feeble minded are notoriously prolific in reproduction.”

She also was supportive of, get this, the FORCED STERILIZATION of these human persons:
“The emergency problem of segregation and sterilization must be faced immediately.  Every feeble minded girl or woman of the hereditary type, especially of the moron class, should be segregated during the reproductive period.  Otherwise, she is almost certain to bear imbecile children, who in turn are just as certain to breed other defectives.  The male defectives are no less dangerous….we prefer the policy of immediate sterilization, of making sure that parenthood is absolutely prohibited to the feeble minded…”

“The grosser, the more obvious, the undeniably feeble minded should, indeed, not only be discouraged BUT PREVENTED from propagating their kind.”  Pivot of Civilization

And she was for purifying the white race:

“Birth control itself, often denounced as a violation of natural law, is nothing more or less than the facilitation of the process of weeding out the unfit, of preventing the birth of defectives or of those who will become defectives”  Women and the New Race

“The mating of a moron with a person of sound stock may gradually disseminate this trait far and wide until it undermines the vigor and efficacy of an entire nation and an entire race.”  Pivot of Civilization

All this just to establish that for one hundred years, the work of Margaret Sanger has avoided scrutiny by people otherwise (and thankfully) looking to uproot any one who has said anything hinting at racism.  A person who spoke at a Klan Rally, was completely focused on rooting out immigrants, and was for a purification of the white race and forced sterilization of people with mental illness…how has she survived scrutiny?

And even SHE HATED ABORTION.  In fact, it seems, from a Catholic perspective, to be the one thing Margaret Sanger got right.

She said: “I assert that the hundreds of thousands of abortions performed in America each year is a disgrace to civilization” Women and the New Race

Planned Parenthood, founded by Margaret Sanger to AVOID abortions, is now the largest abortion provider in our country

Dr. Alveda King, niece of Doctor Martin Luther King Jr., remarked on the error of Planned Parenthood’s abortion-on-demand corporate ideology:
“The most obvious practitioner of racism in the United States today is Planned Parenthood, an organization founded by the eugenicist Margaret Sanger.”

Saint Mother Teresa knew that if a mother could kill her child in the womb, then anyone could do anything imaginable to any other person.

As long as abortion is allowed, this violence and upheaval that we see is the culmination of 50 years of legalized abortion

At the beginning of the Book of Deuteronomy, God tells Moses the Israelites will be given the authority to wipe out the people living in the Promised Land because the occupants of the land at the time did two things:
1)   Worship false gods
2)  Sacrifice their children to these false gods

In a moment, toward the end of the Eucharistic Prayer, I will say “May this Sacrifice of our reconciliation, we pray, O Lord, advance the peace and salvation of ALL the world.”

Sacrificing children to other gods has never worked, but has only brought destruction on people.  This is the only sacrifice, the Sacrifice of Christ on the Cross, that can ever bring peace to our broken world.  Thanks be to God for the opportunity to join ourselves to this Sacrifice while we groan in labor pains for the redemption of our bodies and the return of Christ.

Posted by Father John Hollowell at 8:54 PM No comments: 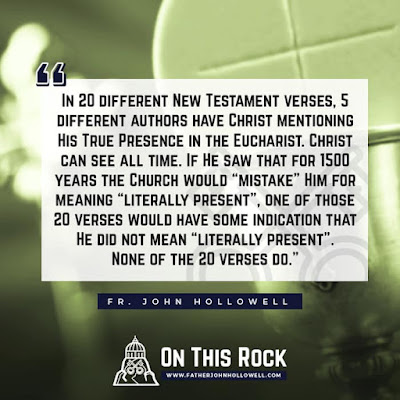