Homily on Vocations: Ask the Lord, Listen to the Lord, and then Respond with Courage!

Posted by Father John Hollowell at 10:34 AM No comments:

Homily on Vocations: Ask the Lord, Listen to the Lord, and then Respond with Courage!

Posted by Father John Hollowell at 10:32 AM No comments:

The black mass of abortion vs. the Eucharist


Homily for the Vigl of Life
Saints Peter and Paul Cathedral
1/25/2017
Feast of the Conversion of St. Paul the Apostle

In the Old Testament, people would bring offerings of animals to the priests
The priests would wash themselves, don their robes, grab the various instruments for the sacrifice, and then go before God to offer the sacrifices on the altar.

At daily Masses the past two weeks we’ve been reading from Hebrews talking about how Christ is now both the priest and the sacrifice. So what we see in the Mass is the perfect priest offering up to the Father the perfect victim – Himself

Mass then is a representation of this sacrifice – Christ the priest offering Himself.

And so at Mass, a priest too, as part of the preparation to stand in the person of Christ, also goes through rituals of preparation. The Church instructs the priest to first wash his hands and say a prayer “Da, Domine, virtutem manibus meis ad abstergendum omnem maculam ut sine pollutione mentis et corporis valeam tibi servire”

2) and then he dons his alb and robes, with the requisite prayers for each item

The Eucharistic Adoration that we participate in tonight, then, is the pausing in time of that moment when Christ the perfect priest offers up to the Father Christ the perfect sacrifice of Himself through the person of the priest

Pausing there for a moment, we must remind ourselves that evil is the complete perversion of that which is good. The greater the good perverted, the greater the evil

At the facility an abortionist washes his hands, dons his surgical robes, grabs his instruments and goes into the steel altar where the pregnant woman lays with her child, and the robed high priest of the evil one murders a perfect victim, not even yet born and that person which is a complete perversion of the perfect priest of Christ murders that which is perfect and offers it up to the god of “choice” or “convenience” or “fear”
Here we do well to note on today’s feast of the conversion of St. Paul that any doctor, any nurse, anyone that has had an abortion that repents of that sin returns rejoicing to the Lord and is cheered by the saints and angels in Heaven. People often say we don’t care about mothers, doctors, children born etc. when in reality it is the Catholic Church offering retreats for women who regret their abortion, offer housing and clothing and food to mothers and children in need. The place you won’t get any charity is at an abortion clinic. They are the ones who take money and then do nothing after the abortion.

I have been to countless Marches for Life, and the part that is always the most moving and beautiful for me is the women and men marching at the front carrying signs that say they regret their abortion – what an amazing and beautiful testimony. We do not condemn those who have participated in such evil sacrifice but we must call the act itself what it is – the purest evil. The blessed sacrament of the Devil

Who we worship here tonight, in this monstrance, is the Truth with a capital T and abortion then is a complete abomination and mockery of the Eucharist. But make no mistake, Christ in the Eucharist is now and will one day completely vanquish that which mocks it
Jesus Christ, the man at whom demons wailed and shrieked in agony, who fled possessed human beings for a herd of pigs and then ran head long into a pond and drowned – Jesus Christ THE exorcist is here in this place and he is in each of us each time we take Communion.

In the Old Testament the Israelite nation marched around the city of Jerricho carrying the Ark of Covenant and what seemed impenetrable came crashing down.

In the same way we bring Christ in us and Christ in the Eucharist out to the streets, out to the front lines of this battle between good and evil.

I was told in physics class that when matter and anti matter meet, there is an explosion. That is what is happening all over the world where Christ meets the evil of abortion.

Allow me to end with a challenge. The saying goes without the priest there is no Eucharist. Christ has chosen to tie his appearance in the world his manifestation in the world to men whom he invites to be priests.

I believe there are a lot of you tonight sitting here that Christ is calling to be priests, asking you to allow Him to work through your hands and bring the Eucharist to a world so desperately in need of it. There is a beautiful reflection on the Annunciation that speaks about how the angels and saints and ALL of creation held its breath waiting for Mary’s “YES” to God, and how rejoicing broke out when she said yes. In the same way, all of Heaven awaits the “yes” of those whom God is inviting to be priests.
Many others of you know people who are being called or may be called to be priests. Young men: SAY YES TO GOD!!!!! And if you know someone you think God might be speaking to, affirm what you see in that person by speaking to them.
The Eucharist is the antidote to Evil, and it is only through the hands of priests that the Eucharist comes into the world.

All vocations offer ways to fight against evil. But I have seen in my 7.5 years of priesthood that some are called by God but they do not respond generously to His invitation. If you are looking to be on the front lines of the battle between good and evil, the priesthood is a direct path to the front lines.

One of Pope Francis’ favorite books is a book titled the Lord of the World about the final showdown between good and evil.

The antichrist has murdered almost everyone else on earth, but the Pope and one of his cardinals hide in a chapel in Jerusalem. The antichrist and his armies show up on a mountain outside the chapel, the mountain of Armageddon, and the book ends with the last pope carrying out a monstrance singing the Tantum Ergo and from the monstrance Christ reveals himself and conquers sin and death once for all

Come, let us adore Him!
Posted by Father John Hollowell at 5:27 PM No comments:

Homily on Christian Unity - "Let there be no divisions among you"

Posted by Father John Hollowell at 12:11 PM No comments:

Christian Unity: Just finding what WORKS for you?

In order to not talk about faith, a lot of people say to one another "whatever works for you"

The problem with this (in addition to it being relativism) is this:

Why settle JUST for what WORKS?

Utilitarianism (based on the word "utility" or "usefulness") is a HORRENDOUS and disastrous philosophical way of looking at things that, despite how horrible it is, is widespread in our culture today.

Utilitarianism judges everything by whether or not it is "useful" (including other people).  Utilitarianism is the philosophy that underlies Communism.  If a loaf of bread "gets the job done" then why have steak?  If dilapidated and drab apartments are livable, then why have anything else?

Of course, under utilitarianism, there ought to be no art, music, poetry, or feasts because they aren't "useful" in the way utilitarians use the word "useful"

So, in the life of Faith, settling for what "just gets the job done" is a sort of horrible communistic utilitarianism as well.

Posted by Father John Hollowell at 8:38 AM No comments:

Posted by Father John Hollowell at 8:15 AM No comments: 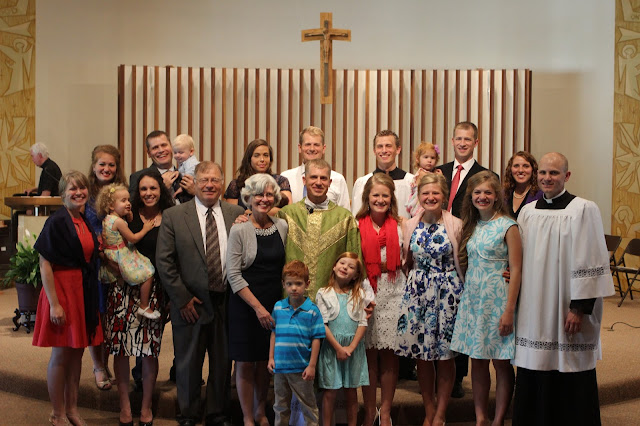 Posted by Father John Hollowell at 3:22 PM No comments:

The Epiphany from the bedside of a dying parishioner

A parishioner shared this poem with me on Monday from his wife's bedside where she is in her final days. It is a beautiful poem that I had not encountered before, and it is from TS Eliot touching on birth, death, and the magi

The Journey Of The Magi

A cold coming we had of it,
Just the worst time of the year
For a journey, and such a long journey:
The ways deep and the weather sharp,
The very dead of winter.'
And the camels galled, sorefooted, refractory,
Lying down in the melting snow.
There were times we regretted
The summer palaces on slopes, the terraces,
And the silken girls bringing sherbet.
Then the camel men cursing and grumbling
and running away, and wanting their liquor and women,
And the night-fires going out, and the lack of shelters,
And the cities hostile and the towns unfriendly
And the villages dirty and charging high prices:
A hard time we had of it.
At the end we preferred to travel all night,
Sleeping in snatches,
With the voices singing in our ears, saying
That this was all folly.

Then at dawn we came down to a temperate valley,
Wet, below the snow line, smelling of vegetation;
With a running stream and a water-mill beating the darkness,
And three trees on the low sky,
And an old white horse galloped away in the meadow.
Then we came to a tavern with vine-leaves over the lintel,
Six hands at an open door dicing for pieces of silver,
And feet kicking the empty wine-skins.
But there was no information, and so we continued
And arriving at evening, not a moment too soon
Finding the place; it was (you might say) satisfactory.

All this was a long time ago, I remember,
And I would do it again, but set down
This set down
This: were we led all that way for
Birth or Death? There was a Birth, certainly
We had evidence and no doubt. I had seen birth and death,
But had thought they were different; this Birth was
Hard and bitter agony for us, like Death, our death.
We returned to our places, these Kingdoms,
But no longer at ease here, in the old dispensation,
With an alien people clutching their gods.
I should be glad of another death.
Posted by Father John Hollowell at 3:16 PM No comments:

Epiphany homily: We Should Just Leave Christ Behind?

Posted by Father John Hollowell at 9:36 AM No comments: