Some Religious Sisters are Distancing Themselves from the Church (part 3)

The Criterion yesterday ran the story of Sister Margaret Mary McBride, a Catholic Sister who signed off on the performing of an abortion at St. Joseph's Hospital in Phoenix, AZ. Sister sat on the ethics committee of the hospital which performed the abortion because the mother's life was at risk. The full story can be found here:

Is Bishop Olmsted's act in this case the first move to help reign in some of the religious sisters who have been obstinately defying the Bishops of this country at every possible opportunity?

A very interesting speech was given last month by Archbishop Raymond Burke (formerly of St. Louis) who now sits at the Church's number 3 post. He has long been leading the charge to help remind people who holds the teaching authority in the Catholic Church. Some portray this as theological chest pounding but imagine yourself placed as the head of a diocese; you are made the chief shepherd. You are also now made responsible for the souls of all of those in your diocese, Catholic or not, which means that when you die you will be asked to make an accounting for the state of every soul placed under your care. You are asked to lead these people to Christ through the Sacraments and the teaching of Christ's Church. Now imagine someone stands up and says, "The Bishop is wrong - to be authentically Catholic you need to be going THIS way, follow me!" You HAVE to stand up for the teaching authority of the Church and thus for your own teaching authority - EVEN AT THE RISK OF SOUNDING LIKE YOU ARE AN ARROGANT WIND BAG WHO JUST WANTS PEOPLE TO RESPECT YOUR AUTHORITY."

Here are some of the comments made by Archbishop Burke (soon to be Cardinal Burke). May God bless our Bishops as they continue to lead us through a most tumultuous and confusing time.

"[...Our joy today is] overshadowed by the public and obstinate betrayal of religious life by certain religious. Who ever could have imagined that religious congregations of pontifical right, would openly organize to resist and attempt to frustrate an apostolic visitation, that is, a visit to their congregations carried out under the authority of the vicar of Christ on earth, to whom all religious are bound by the strongest bonds of loyalty and obedience?

Who could imagine that consecrated religious would openly, and in defiance of the bishops as successors of the apostles publicly endorse legislation containing provisions which violated the natural moral law in its most fundamental tenets – the safeguarding and promoting of innocence and defenseless life, and fail to safeguard the demands of the free exercise of conscience for health care workers?

We witness a growing tendency among certain consecrated religious to view themselves outside and above the body of Christ as a parallel institution looking in upon the Church with an autonomy which contradicts their very nature. We have certainly come a long way from the total loyalty to the Roman Pontiff which was at the heart of the foundation of the Society of Jesus and of every religious congregation. Religious life lived in the heart of the Church, and for that reason religious congregations are, by their very nature, bound in strictest loyalty to the Roman Pontiff. It is of course an absurdity of the most tragic kind to have consecrated religious knowingly and obstinately acting against the moral law.

The spiritual harm done to the individual religious who are disobedient and also the grave scandal caused to the faithful and people in general are of incalculable dimensions." 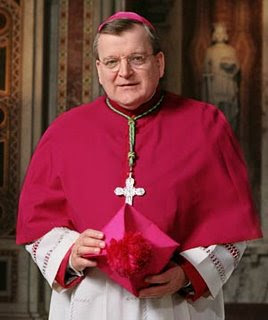 Posted by Father John Hollowell at 10:17 AM