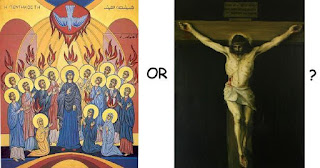 As a priest who celebrates the Latin Rite Mass in both forms (the Extraordinary Form which is typically called the "Latin Mass" and the Ordinary Form which is your typical parish Mass today) a question has been hanging out there for me this year - which liturgical calendar do I live by?

The calendars for the two forms of the Latin Rite are very similar, although on certain days, they can vary widely. This is perhaps no more so than today. In the Extraordinary Form of the Mass, today is the 6th day of celebrating Pentecost. It is by no means a day of fasting, but instead is to be celebrated as a very holy day. However, in the Ordinary Form, today is a normal Friday in ordinary time, and is, for those who so choose, a day of some form of penance or abstinence in rememberence of Christ's sacrifice on the cross.

The Holy See clarified the issue a bit in 2008 when they noted that major feasts and days are to be celebrated according to the Ordinary Form's calendar. So, for example, in the U.S., the Ascension is transferred to Sunday, and so even if one went to an Extraordinary Form Mass on "Ascension Thursday" the Mass would have to be a regular Mass.

What the Vatican's letter does not cover is what happens when a feast arises (such as this Octave of Pentecost) which is ONLY celebrated in the Extraordinary Form? Or what happens with the feast days of saints that are in the "old" calendar, but not in the "new" one? It seems to me that Rome might be moving to clarify this - it would certainly be helpful?
Posted by Father John Hollowell at 2:25 PM