"The Greatest Trick the Devil Ever Pulled Was Convincing the World He Didn't Exist!" 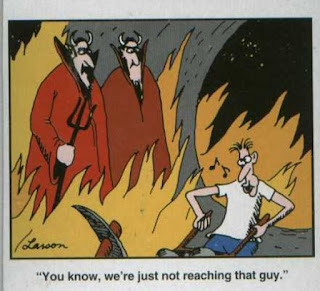 I was asked by Bethany Mcewan, an English teacher at Ritter, to talk to her classes about Satan. I had given a homily about how Satan tries to ensnare us, and as her classes were reading over the Crucible (about the Salem Witch Trials) they had a lot of questions about Satan. Their textbook wasn't much help either, as the "professors" in their book said that Satan was mostly a creation of humanity to keep people under control or to help place the blame for mental illnesses and so forth - it was the same stuff people like that always say.

If Satan is mentioned in our world today, it is mostly as a cartoonish figure with no real power. I titled my talk to the juniors, then, "The Greatest Trick the Devil Ever Pulled was Convincing the World He Didn't Exist." That is a quote originally found in a movie called "The Usual Suspects" and I think it contains a lot of wisdom. That helped the young people first of all understand that what the "English professors" are saying about Satan plays right into his hand; they are saying exactly what he wants people to think.

We also talked about how usually people think that you have to worship Satan in order to be doing his work. However, I mentioned that if Satan is the most prideful soul ever, then would he really care if we worshiped him? Of course not. He just wants to wreck God's plan; if he can do that, he is most pleased.

How then does he work? We looked at three clips from the "Passion of the Christ" that feature Satan. All of them are very beautifully done, and are an artist's interpretation alone, but nonetheless they all illustrate the same point - Satan works behind the scenes, manipulating people, and he loves the fact that no one sees him in the shadows pulling strings.

Each of the clips from the "Passion" shows Satan walking or standing just behind the people perpetrating violence. These are two of the clips we looked at:

This may be my favorite clip from any movie - it shows Mary staring Satan down (who is again walking just behind those who are doing his work (in this scene the temple guards and the Sadducees). This is Gibson saying "those who want to see Satan will see him, but you have to know where to look."

Finally, to bring it to the present, I read to them part of the lyrics from an Usher song entitled "My Little Freak." If you want to see what the young people are listening to today, I challenge you to look up those lyrics. I had heard it on the radio a few days earlier, and I knew I needed to speak about it to them. Certainly music has been getting more sexual since the early 1900's, but this song is over the top. There is absolutely nothing redeeming about it whatsoever. I talked to the kids (pretty wide-eyed after hearing me read them the lyrics to their favorite song) about how no one involved in bringing this song about would say "Oh yeah, I worship Satan." Some are motivated by money, some by fame, but I doubt any are motivated by pleasing the Lord of Darkness - and again, that is exactly how he wants it. May we spot the Prince of Darkness in the midst of all of his deception, and may our young people fight the good fight!
Posted by Father John Hollowell at 7:53 PM