What Every Real Catholic Must Do Once In Their Lifetime

There is a battle that has been raging for a long time over Catholic Church history.  As one of my favorite Church historians, Regine Pernoud has put it:

"It is so easy, in fact, to manipulate history, consciously or unconsciously, for a public that is not knowledgeable about it…The Middle Ages is privileged material: one can say what one wants about it with the quasi-certitude of never being contradicted.”

Catholics are routinely bludgeoned by "historians" who usually don't know much about history themselves.  That's why every Catholic must, at least once in their life, read a book on Church history that has been written by a Catholic.

I was recently asked to review two books on Church history that were published by Ignatius Press.  Both of them are excellent.

First of all, I was asked to review "The Seven Big Myths About the Catholic Church" by Dr. Christopher Koczar.  This book is great for a couple of reasons.
A) It is super short 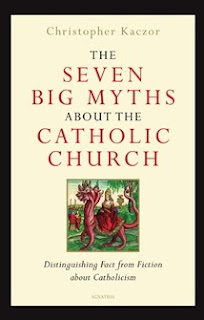 B) It directly confronts the lies and deceptions that people so often get away with and refutes them.  Those who follow this blog know that I'd much rather confront a topic head on than dance around it.

This book is also great because it goes back in time to look at how history has impacted issues relevant to our own day.  This book is a MUST for your high school or college-aged young person.  It is a handbook anyone can turn to amidst the attacks that regularly assault Catholics.

The other book I was asked to review is Dr. James Hitchcock's "History of the Catholic Church."  You may have seen Dr. Hitchcock providing tireless and invaluable commentary during EWTN's coverage of Pope Benedict's resignation and the subsequent papal conclave.

Dr. Hitchcock's book is not something that most people would likely read cover to cover because it is 530 pages.  However, it is organized in a way that I've not seen any other Catholic history books.  Instead of long and lengthy narratives or chapters, the book goes through history in paragraph spurts.  In addition, to make it even easier to read, there is a word in the margin that sums up what the paragraph is about. Here's an example: 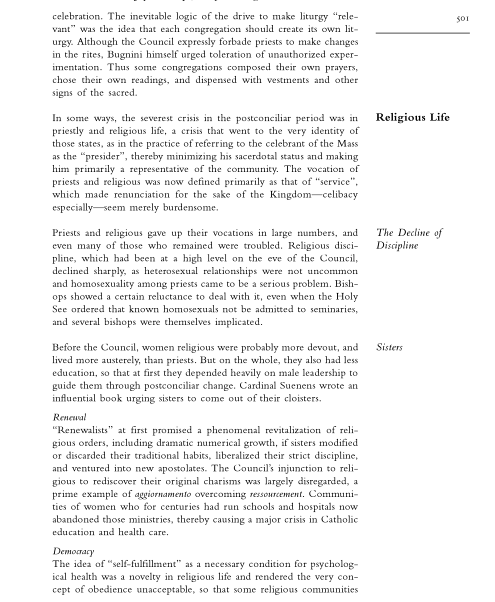 This book would be a solid addition to any Catholic's library, and would make a solid and quick reference source that one could easily and quickly turn to to get a glimpse at the historical setting of just about anything Catholic that has happened over the course of the last 2,000 years.

Dr. Hitchcock's book is another indispensable tool for people looking to actually learn about authentic Church history, warts and all, while at the same time recognizing that the cartoonish view of Church history that dominates our current cultural landscape is false and is the work of the Devil.

Other books I strongly recommend on the subject of Church history would be
"Those Terrible Middle Ages" by Regine Pernoud,
"Triumph" by H.W. Crocker III,
"The Stripping of the Altars" by Eamond Duffy,
"How the Catholic Church Built Western Civilization" by Thomas Woods Jr.,
"To Quell the Terror" by William Bush,
"France and the Cult of the Sacred Heart" by Raymond Jonas, and
"Seven Lies About Catholic History" by Diane Moczar.

Learn how to fight back against JV historians!

Posted by Father John Hollowell at 7:15 AM