Does the Church Spend 4.7 Billion on Charities?

I wrote about the Church appearing in the Economist last year here.

I received a solid follow up question tonight that I thought was worth addressing.

Among many things in the Economist article, they include a pie chart of estimated Church expenses

First of all it is important to note that the article is only talking about the Catholic Church in the United States. 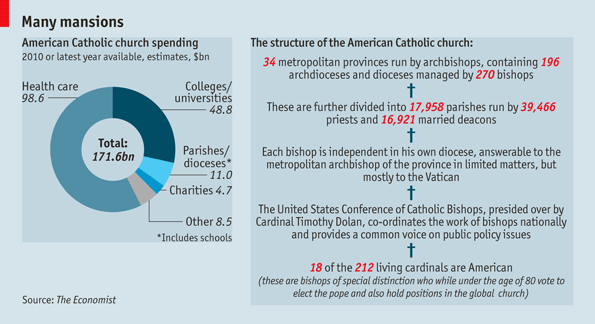 Some comments about the concern that the Church only spent 4.7 billion on charity in 2010

1) health care IS A CHARITY in the mind of the Church.  We offer health care to the poorest of the poor.  I've worked in and with Catholic hospitals, have spoken with their presidents and looked at their numbers...I can promise you this...Catholic hospitals out lay BILLIONS on health care for the poor and for those who can not afford it.  One of the corporal works of mercy from Matthew, Chapter 25 is care for the sick

2) Catholic education, at the university, high school, and grade school level IS A CHARITY.  We've considered it a work of mercy to teach and instruct people both about the Catholic Faith but also about science, history, how to write, etc.  It is an agreed upon statistic that Catholic schools save U.S. taxpayers 9 billion dollars a year.  9 BILLION.  Where does that number come from?  If every Catholic Church closed its school and all the Catholic high schools closed right now, it would cost school districts 9 billion dollars to educate those kids in the public school system per year.  However, thanks to Catholic schools, that 9 billion can then be used on helping the poor, the sick, etc.

3) This is the biggest miscalculation of all though in this pie chart - spending money on clergy and nuns etc. is in UNCALCULABLE investment in charity.  What I mean by that is this - Mother Teresa "cost" the Catholic Church...what...perhaps 20,000 a year in "salaries" (and that is an extremely high estimation) and yet can you put a dollar amount on the charity that she did?  So on the financial ledger the Church has spent 20,000 on Mother Teresa and nothing on charity, but we all know that is a joke, Mother Teresa did millions (perhaps billions) of dollars in charitable work.

Then, let's factor in all the charitable work that a parish does that is never entered on the ledger either.  All the people we help, all the houses we build, the volunteering at food banks and other ministries.  On the ledger of the Economist, that would be $0 in, and $0 out, but most of the people that have been helped by Catholic parishes would say that there was a value to the help they received.

So lets add up the total amount of charitable work that is done by all the clergy, parishioners, nuns, etc...but we can't because it is probably in the trillions, or, more likely in the gazillions or whatever comes after trillion.

4) A fourth and final point here is that many, myself included, would argue that the "number spent on charity" in the Economist's chart should be $0.  What I mean by that is this: at my parish church, Annunciation Catholic Church, people put money in the collection basket.  If they put that money in the collection basket, they are not expecting me, as the priest and pastor, to go and pass that money on to another charity...the Church is a charity.  It would be wrong of me to give away money to other charities, when people are giving it to the Church to use.  If people wanted to give the money to other charities, they would, AND THEY DO, and we have second collections all the time, thus providing opportunities to give to other charities, or they can go write a check to Habitat for Humanity or whomever any time they please.  If someone gives you money as a charity, they want you to use it on what YOU do, they aren't giving it to you to give to other charities.