counting down the twenty most epic events, in my opinion, of Pope Benedict's Pontificate, beginning with #20:

20) "The Dictatorship of Relativism" homily 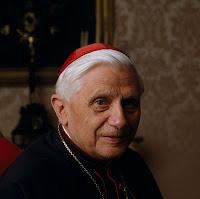 
Today, having a clear faith based on the Creed of the Church is often labeled as fundamentalism. Whereas relativism, that is, letting oneself be "tossed here and there, carried about by every wind of doctrine", seems the only attitude that can cope with modern times. We are building a dictatorship of relativism that does not recognize anything as definitive and whose ultimate goal consists solely of one's own ego and desires.

We, however, have a different goal: the Son of God, the true man. He is the measure of true humanism. An "adult" faith is not a faith that follows the trends of fashion and the latest novelty; a mature adult faith is deeply rooted in friendship with Christ.

Posted by Father John Hollowell at 12:36 AM