5) Light of the World - A conversation with Peter Seewald, October, 2010

What drew all of the attention was the apparent bomb-shell which wasn't.  Pope Benedict was asked about a comment he made on his plane trip to Africa in 2009 where he again reminded the media that the Church is opposed to the use of condoms in fighting the spread of AIDS because they only make the problem worse.  It is best to read the entire answer from Pope Benedict, along with Seewald's follow up question:

"The media coverage completely ignored the rest of the trip to Africa on account of a single statement. Someone had asked me why the Catholic Church adopts an unrealistic and ineffective position on Aids. At that point, I really felt that I was being provoked, because the Church does more than anyone else. And I stand by that claim.

Because she is the only institution that assists people up close and concretely, with prevention, education, help, counsel, and accompaniment. And because she is second to none in treating so many Aids victims, especially children with Aids.

I had the chance to visit one of these wards and to speak with the patients. That was the real answer: The Church does more than anyone else, because she does not speak from the tribunal of the newspapers, but helps her brothers and sisters where they are actually suffering.

In my remarks I was not making a general statement about the condom issue, but merely said, and this is what caused such great offense, that we cannot solve the problem by distributing condoms. Much more needs to be done. We must stand close to the people, we must guide and help them; and we must do this both before and after they contract the disease.

As a matter of fact, you know, people can get condoms when they want them anyway. But this just goes to show that condoms alone do not resolve the question itself. More needs to happen. Meanwhile, the secular realm itself has developed the so-called ABC Theory: Abstinence-Be Faithful-Condom, where the condom is understood only as a last resort, when the other two points fail to work.
This means that the sheer fixation on the condom implies a banalization of sexuality, which, after all, is precisely the dangerous source of the attitude of no longer seeing sexuality as the expression of love, but only a sort of drug that people administer to themselves. This is why the fight against the banalization of sexuality is also a part of the struggle to ensure that sexuality is treated as a positive value and to enable it to have a positive effect on the whole of man's being.

There may be a basis in the case of some individuals, as perhaps when a male prostitute uses a condom, where this can be a first step in the direction of a moralization, a first assumption of responsibility, on the way toward recovering an awareness that not everything is allowed and that one cannot do whatever one wants. But it is not really the way to deal with the evil of HIV infection.
That can really lie only in a humanization of sexuality.

Peter Seewald: Are you saying, then, that the Catholic Church is actually not opposed in principle to the use of condoms?

Pope Benedict: She of course does not regard it as a real or moral solution, but, in this or that case, there can be nonetheless, in the intention of reducing the risk of infection, a first step in a movement toward a different way, a more human way, of living sexuality."

Despite the media reporting instantly and everywhere that the Church had changed its teaching based on this statement by Pope Benedict, what we have here is the Pope simply using what most would say was a poor example to talk about people experiencing a beginning of a warming of one's heart to the Christian message by first starting to show signs of respecting the other person.  Given its context, the example by the Holy Father was probably not the best, but of course the Vatican would, moving forward, reiterate a ton more how the Pope was not saying that the Church's teaching had changed at all.

To refocus briefly on the content of the Pope's answer, it is important to note that no one does more for the poor, no one is more involved in the care of AIDS victims in Africa than the Church.  If something were going to make the problem better, the Church would be all ears, but it is clear that condoms do not work practically, nor do they do anything but damage the person spiritually either.


Some other great quotes from Light of the World

"I believe that celibacy becomes a very meaningful sign, and above all becomes possible to live, when priests begin to form communities.  It is important for priests not to live off on their own somewhere, in isolation, but to accompany one another in small communities, to support one another, and so to experience, and constantly realize afresh, their communion in service to Christ."

"Science itself is now gaining an insight into its limits, that many scientists today are saying: "Doesn't everything have to come from somewhere?" and that we have to pose this question again.  A new understanding of religion is reemerging because of this."

"Someone didn't just one day invent the liturgy, but that it has been growing organically since the time of Abraham."

"Being human is like a mountain-climbing expedition that includes some arduous slopes.  But it is by them that we reach the summit and are able to experience for the first time how beautiful it is to be." 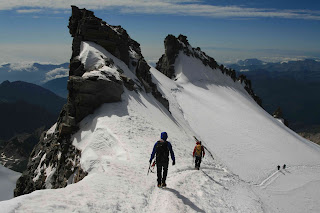 Posted by Father John Hollowell at 8:35 AM