How Do We Help Our Young People Get Beyond "Grinding" ?

If you have a child not in high school yet, there will be a part of you that will wish you didn't know what grinding is.

I thought I was well-versed in the ways of the world of young people when I came to Ritter three years ago.  I had just been at another Catholic school prior to seminary only about 5 years earlier.  When I went to chaperone the prom that first year at Ritter, though, I couldn't believe what I was seeing.  It is basically summed up in this picture below. 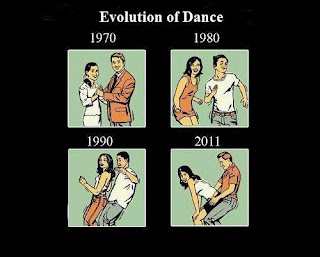 Some would argue that dance has always been sexual, which I grant, but there is a serious line that is crossed (as most rational people will grant) when dance devolves into the "grinding" illustrated in the 2011 photo.

I missed prom last year at Ritter, and so I kind of forgot about "grinding" but a few parents reminded me about it in the run up to prom this year, and I knew I was supposed to do something.

We met with the young people and told them grinding = being kicked out of prom, and that if all did it, then we'd shut prom down.  I had several students thank me afterwards.  One girl noted "Father, thanks, it is kind of hard to dance when two people are basically having sex right next to you."

This post isn't about what we did at Ritter this week; I want it to be about what all schools (especially Catholic) can do about the issue.

We did a nice job with step 1 at Ritter - stop the bleeding.  At some point there has to be from schools the nuclear option, the "if you do this you're done" talk with a serious intent to follow through.  I was fully prepared to throw some kids out last night, but thankfully none of them tested our resolve (did I mention I'm EXTREMELY proud of our young people?)

Every Catholic school needs to implement the nuclear option as a school wide policy for next year as step 1.

Now...and much more difficult and time consuming and requiring a lot more creative energy and passion is step 2 - teaching our young people HOW to act at formal dances and so forth.

As I was thinking about prom yesterday and praying about it, I'd like to share the "vision" that came to mind.

What if we, in the run up to prom, brought in someone to teach our young people formal business dining etiquette?  When I was in college, the Hanover business school (very well respected nationally) always brought in people to train our business students in the ways of etiquette.  Again, our kids did a great job last night, but I noticed a lot of them getting up and running around to other tables.  I remember my own prom and never being taught how to carry on a conversation with a table of people and I remember it was sort of awkward.  Often times, even those young people who carry a conversation do so to the exclusion of others at the table by relying on inside stories and so forth with only some at the table.  Other issues would be as simple as which fork do you use?  Where does the bread go?  Where can I reach, and when do I have to ask someone to pass something?

The men could have a whole separate talk about opening car doors, holding an umbrella for a lady, polite conversation and not swearing in front of a lady, offering an arm, helping a woman get seated, etc.

While the young men are getting talked to the ladies could be taught about modesty and finding a dress that is appropriate and so forth.

Then, there could be a presentation on how to dance.  This is the biggy - we can't just tell them "don't grind" we also need to start showing them HOW to dance and have a good time.  Do our young people know how to swing dance?  Have they ever even heard jazz?

Then, at the actual prom, we need to shell out the extra dollars and bring in a live band.  A live band can help side step the problem of the horrible lyrics that are being played when a DJ is involved.  Even if the cuss words are blanked out, what is being said in the rest of the song is typically problematic.

Anybody who has been to a reception with a live band knows it can actually be a lot more fun.

Perhaps this "vision" could still be done by parishes for public school proms.  The parish might even be able to host a formal dinner before hand for all of the young people to attend.

We need to be pro-active with all of this.

"Thou shalt not grind" is a good start, but we need to be doing a lot more to help our young know how much fun is possible.

Posted by Father John Hollowell at 10:11 AM