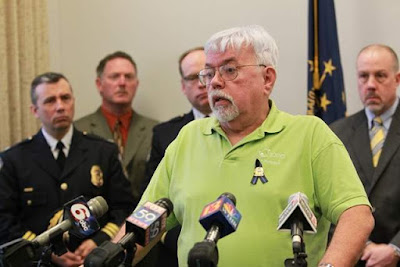 Officer David Moore, who I had the quite unexpected privilege of helping to eulogize at his funeral last year, is back in the news. Dave's parents, Spencer and Jo Moore, were on the front page of the Indystar yesterday once again showing this city how to be heroically good people.

Officer Moore's killer had requested mercy, and the family's response..."Once he asked for compassion, we felt like we should give it to him."

The man responsible for ending the life of Officer Moore will get life in jail.

The most open and shut case for the death penalty is the murder of a police officer, and currently in Indiana two men are on death row for just such a crime. The only thing that can spare a person from such a fate - mercy from the family - and that is precisely what David's killer received.

David and his parents were great people before David's slaying, in a heroic flipping of roles, THEY seemed to help the rest of the city mourn Dave's death, and now, yet again, the Moore family has taught the city what it means to forgive.

Click here to read the Indystar's coverage
Posted by Father John Hollowell at 7:48 AM