As my fourth year of seminary was drawing to a close, I emailed some of the professors I would have the following fall to see if there were any books I could read over the Summer to get them out of the way. One of my profs, Fr. Guy Mansini, shot back an email - "Hollowell...summers are for fiction!" He then went on to give me some suggestions of novels that would be life-changing.

Since then, I've followed Fr. Guy's advice, much to my enjoyment, and have made summer a time for more pleasurable reading.

That being said, I still like a little Catholicism thrown in with my novels, and so I usually look to find something that possesses a nice mixture of theology and an addictive plot, but I'm not always successful in this search. Take the book I finished a few weeks ago - "The Sword of Honor Trilogy" by Evelyn Waugh. Waugh is a well-known Catholic author who wrote during the middle of the 20th century, and most famously penned "Brideshead Revisited", a book that I thoroughly enjoyed and couldn't put down. However, "The Sword of Honor Trilogy" literally took me three years to read! I kept thinking that the payoff would come, but it never did. Perhaps I missed something, but it was one of the most painful books that I've ever finished. 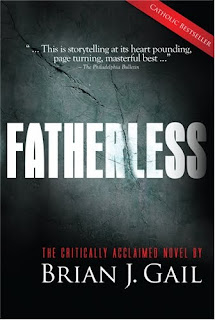 Just last week I picked up a new novel, and although it was a little over 500 pages, I finished it in about a week! The novel's title is "Fatherless" and is written by Brian Gail. Ignatius Press seems to always be promoting several novels, and I'm always leery that they will be heavy on the theology and light on the art of writing. "Fatherless" does have some elements of faith woven into the plot line, but the book is expertly written and was tough to put down - it was that rare story where I didn't want to stop reading. The other aspect of the book that I really appreciated from an artistic point of view was that it possessed that key element that always seems to distinguish art from that which is done to simply make money - "Fatherless" is real. When I say real, I mean that the story is not just some fairy tale with a happy ending - it certainly has redemption for some of the characters but there is also death and selfishness and sin, and it is all, the good and the bad, written about in such a way that it seems like the events described could actually have happened.

I can't recommend "Fatherless" enough, and if you are interested in ordering the book, just click here. 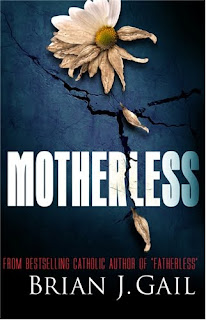 Gail has since also written the second of his novels - titled "Motherless" which picks up the story 20 years later. I ordered it the night I finished reading "Fatherless" - and Gail is nearing completion on the third and final act - "Childless" which is supposed to be out sometime this year. To order "Motherless" click here.

Whatever you are doing this July I hope that you are rejuvenating a bit and getting your nose into a great book or two!
Posted by Father John Hollowell at 7:10 PM