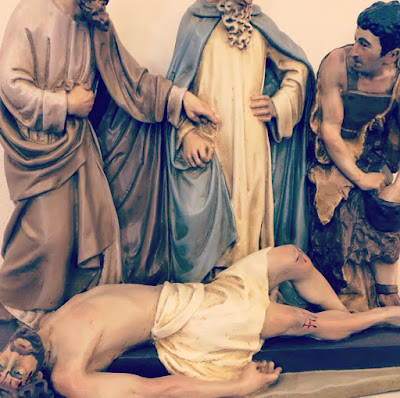 The 11th Station: Jesus is nailed to the Cross

Meditation from Pope Benedict: “Jesus is nailed to the Cross. The shroud of Turin gives us an idea of the unbelievable cruelty of this procedure. Jesus does not drink the numbing gall offered to him: he deliberately takes upon himself all the pain of the Crucifixion. His whole body is racked; the words of the Psalm have come to pass: “But I am a worm and no man, scorned by men, rejected by the people” (Psalm 22:7). “As one from whom men hide their faces, he was despised … surely he has borne our griefs and carried our sorrows” (Isaiah 53:3f.). Let us halt before this image of pain, before the suffering Son of God. Let us look upon him at times of presumptuousness and pleasure, in order to learn to respect limits and to see the superficiality of all merely material goods. Let us look upon him at times of trial and tribulation, and realize that it is then that we are closest to God. Let us try to see his face in the people we might look down upon. As we stand before the condemned Lord, who did not use his power to come down from the Cross, but endured its suffering to the end, another thought comes to mind. Ignatius of Antioch, a prisoner in chains for his faith in the Lord, praised the Christians of Smyrna for their invincible faith: he says that they were, so to speak, nailed with flesh and blood to the Cross of the Lord Jesus Christ (1:1). Let us nail ourselves to him, resisting the temptation to stand apart, or to join others in mocking him.” 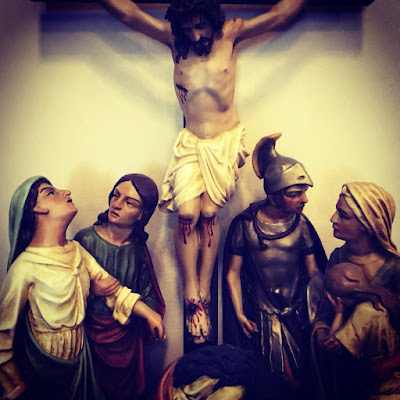 The 12th Station: Jesus dies on the Cross
Meditation by Pope Benedict: “In Greek and Latin, the two international languages of the time, and in Hebrew, the language of the Chosen People, a sign stood above the Cross of Jesus, indicating who he was: the King of the Jews, the promised Son of David. Pilate, the unjust judge, became a prophet despite himself. The kingship of Jesus was proclaimed before the entire world. Jesus himself had not accepted the title “Messiah,” because it would have suggested a mistaken, human idea of power and deliverance. Yet now the title can remain publicly displayed above the Crucified Christ. He is indeed the king of the world. Now he is truly “lifted up.” In sinking to the depths he rose to the heights. Now he has radically fulfilled the commandment of love, he has completed the offering of himself, and in this way he is now the revelation of the true God, the God who is love. Now we know who God is. Now we know what true kingship is. Jesus prays Psalm 22, which begins with the words: “My God, my God, why have you forsaken me?” (Psalm 22:2). He takes to himself the whole suffering people of Israel, all of suffering humanity, the drama of God’s darkness, and he makes God present in the very place where he seems definitively vanquished and absent. The Cross of Jesus is a cosmic event. The world is darkened, when the Son of God is given up to death. The earth trembles. And on the Cross, the Church of the Gentiles is born. The Roman centurion understands this, and acknowledges Jesus as the Son of God. From the Cross he triumphs — ever anew.” 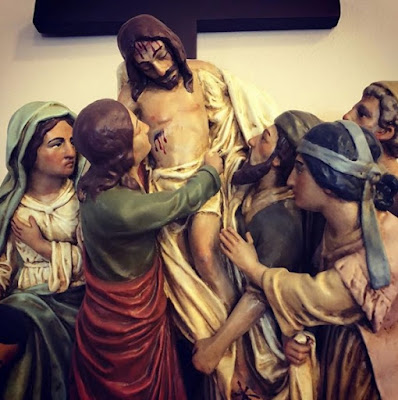 The 13th Station: Jesus is taken down from the Cross and given to his mother

Meditation by Pope Benedict: “Jesus is dead. From his heart, pierced by the lance of the Roman soldier, flow blood and water: a mysterious image of the stream of the sacraments, Baptism and the Eucharist, by which the Church is constantly reborn from the opened heart of the Lord. Jesus’ legs are not broken, like those of the two men crucified with him. He is thus revealed as the true Paschal lamb, not one of whose bones must be broken (…). And now, at the end of his sufferings, it is clear that, for all the dismay which filled men’s hearts, for all the power of hatred and cowardice, he was never alone. There are faithful ones who remain with him. Under the Cross stands Mary, his Mother, the sister of his Mother, Mary, Mary Magdalen and the disciple whom he loved. A wealthy man, Joseph of Arimathea, appears on the scene: a rich man is able to pass through the eye of a needle, for God has given him the grace. He buries Jesus in his own empty tomb, in a garden. At Jesus’ burial, the cemetery becomes a garden, the garden from which Adam was cast out when he abandoned the fullness of life, his Creator. The garden tomb symbolizes that the dominion of death is about to end. A member of the Sanhedrin also comes along, Nicodemus, to whom Jesus had proclaimed the mystery of rebirth by water and the Spirit. Even in the Sanhedrin, which decreed his death, there is a believer, someone who knows and recognizes Jesus after his death. In this hour of immense grief, of darkness and despair, the light of hope is mysteriously present. The hidden God continues to be the God of life, ever near. Even in the night of death, the Lord continues to be our Lord and Savior. The Church of Jesus Christ, his new family, begins to take shape.” 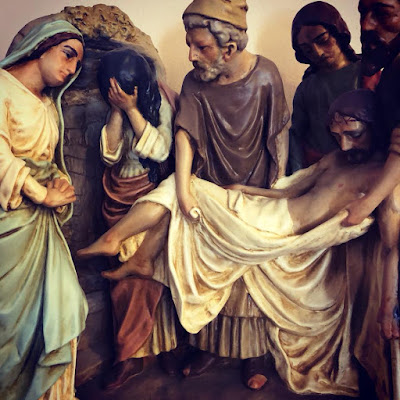 The 14th Station: Jesus is laid in the tomb
Meditation from Pope Benedict: “Jesus, disgraced and mistreated, is honorably buried in a new tomb. Nicodemus brings a mixture of myrrh and aloes, about a hundred pounds weight, which gives off a precious scent. In the Son’s self-offering, as at his anointing in Bethany, we see an “excess” which evokes God’s generous and superabundant love. God offers himself unstintingly. If God’s measure is superabundance, then we for our part should consider nothing too much for God. This is the teaching of Jesus himself, in the Sermon on the Mount (Mt 5:20). But we should also remember the words of Saint Paul, who says that God “through us spreads the fragrance of the knowledge of Christ everywhere. We are the aroma of Christ” (2 Corinthians 2:14ff.). Amid the decay of ideologies, our faith needs once more to be the fragrance which returns us to the path of life. At the very moment of his burial, Jesus’ words are fulfilled: “Truly, truly, I say to you, unless a grain of wheat falls to the earth and dies, it remains alone; but if it dies, it bears much fruit” (John 12:24). Jesus is the grain of wheat which dies. From that lifeless grain of wheat comes forth the great multiplication of bread which will endure until the end of the world. Jesus is the bread of life which can satisfy superabundantly the hunger of all humanity and provide its deepest nourishment. Through his Cross and Resurrection, the eternal Word of God became flesh and bread for us. The mystery of the Eucharist already shines forth in the burial of Jesus.”
Posted by Father John Hollowell at 2:37 PM