Nate Update: "the CHAMP is here"

When my brother Nate was diagnosed with cancer, the thing I kept hearing from people over and over again - "It is important to have something to look forward to!"

I asked Nate, early on, if there was anything he was looking forward to.  A trip to Rome to visit my brother Deacon Tony Hollowell?  Climb a mountain somewhere?  Disney World?


Nate said the thing he was looking forward to the most was starting back up at school.


Not too long before he was diagnosed with cancer, Nate had switched his major to pre-med.  He was in pre-pharmacy, and was tearing it up (he had the highest score in his organic chemistry class, a class that is used to weed out pre-med students, pre-pharmacy students, etc.).

As a cancer patient, Nate said one good thing was that he got to see all the different types of doctors at work, and he was able to rule some types out, and he has become more interested in possibly being other types of doctor.  the jury is still out, but I have no doubt that whatever type of doctor he becomes, he will do an unbelievable job!


Because Nate was looking forward to school, a friend of mine (Missy Scarlett) worked up a poster for him that he hung in his room.  The poster was a small reminder, during the tough times, that the road of chemo and cancer would eventually come to an end.

The poster was real simple - it had the first day of classes at IUPUI on it and a quote about doctors from Pope Francis. 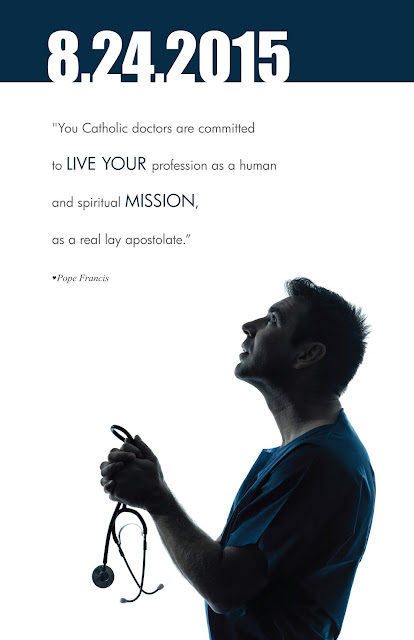 Because of having to have his chemo delayed one week because of a low blood count a few months ago, he now actually has one more round of chemo that starts tomorrow.  He has 48 hours of chemo left, and he plans to attend classes with his chemo pump Tuesday and Wednesday.   He jokingly noted that it might get him a few bonus points with some of the teachers!

But this morning Nate goes back to college, infinitely happier to be there than most other students, and it has been inspiring and humbling to see him carry this cross with such dignity.

Posted by Father John Hollowell at 8:54 AM