Today I celebrate my fourth anniversary of priesthood, and I can't imagine a better way to celebrate!  This morning, my brother Tony and I were one of the first few hundred people into St. Peter's Basilica, and I was able to have Mass at the "Altar of the Presentation in the Temple".  It was AWESOME to celebrate Mass there.  There are probably thirty altars throughout the Basiilica, and each morning priests are allowed to come in and celebrate Mass from 7am until around 8am.  After the morning, the pilgrims usually start to make it a less prayerful place, but when there are all the Masses being said at all of the different altars, it is an amazingly awesome time to be in the basilica.  Below is a photo at the altar immediately after Mass finished. 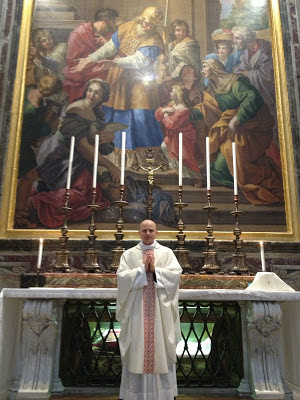 Another cool feature of the multiple Masses being prayed throughout the Basilica is that sometimes a group at one of the altars will sing or chant, and so throughout the Church, for about an hour, the space is filled with (but not overpowered by) beautiful hymns of praise.  At the altar directly across from the "Altar of the Presentation" is the altar where Blessed Pope John Paul II is buried, and there was a massive Polish Pilgrimage celebrating Mass 100 yards or so from us.  They sang and chanted most of the Mass, and although I don't know a lick of Polish, it provided a beautiful aura for our Mass as well.

After Mass, my brother and I had a nice Italian breakfast to celebrate four blessed years of priesthood.  Here's a photo of us enjoying some coronetti and espresso.  I had a double shot to celebrate the anniversary. 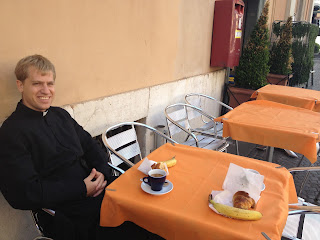 Just a brief reflection from the day: the reading at Mass today is the reading that is perhaps most associated with the vocation of marriage - the interaction between the Archangel Raphael with Tobiah and his wife Sarah (click here to read the readings for the day).  In my brief homily I simply noted that it would at first seem somewhat ironic that a priest have that particular reading on his anniversary of ordination, but there is much in common between the priesthood and marriage.  A priest marries the Church and is asked to be a "Father" just as a husband is given the same call.  And just as in the story of Tobiah, the "Father" is guided by an angel, so to priests are guided by the angels and saints.  Also, just as Tobiah and his wife Sarah kneel in prayer together, a priest is sustained by prayer.  As Archbishop Buechlein once told me, "when a priest comes to me and says he's thinking about leaving the priesthood, I always ask him how long ago he stopped praying."

I end with the opening prayer from the Mass a priest prays on the anniversary of his ordination:


Holy Father, who, by no merit of my own, chose me
for communion with the eternal priesthood of your Christ
and for the ministry of your Church,
grant that I may be an ardent yet gentle preacher of the Gospel
and a faithful steward of your mysteries.
Through our Lord Jesus Christ, your Son,
who lives and reigns with you in the unity of the Holy Spirit,
one God, for ever and ever.
Posted by Father John Hollowell at 5:27 AM