I can still vividly recall my first marathon.  They had, up to that point in my life, struck me as quite odd.  Being a sprinter on the track team, racing over the course of 26 miles and several hours seemed quite strange, and it seemed like people were just dragging things out way too long.  The first time I attended a marathon, my perception changed dramatically.

In talking with other people about this, I've realized that the thing that strikes most people about marathons is how inspiring the dang things are.  First of all, the lead runners are inspiring because they are running so fast and have trained their body so well that they can run 5 minute miles for two straight hours!

As inspiring as the lead runners are, the real inspiration comes when you stick around and watch the middle to the back of the pack. 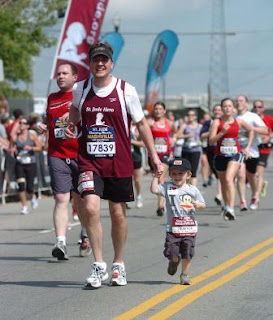 As the middle of the pack comes through, you start to see the T-shirts - "I'm running for Mom" - "RIP Dad...this one's for you" - you see people running to raise money for causes - or to celebrate the fact that they just kicked some disease square in the teeth and are on the mend.  You see firefighters walking in all of their gear in memory of a fallen comrade, periodically pulling their masks off to throw up.  You see army vets thankful to put their hard fought freedom to use by simply going for a jog.  You see wheel chair racers fighting up hill with sheer exhaustion in their faces as they try to do with their arms what everyone else is struggling to do with their legs.  You see people struggling, you see people running for a purpose and wavering on falling short of their goal... 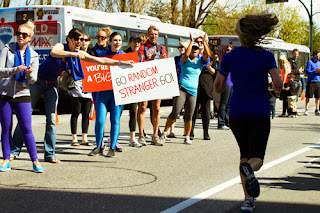 And you see the supporters.  The throngs and throngs of supporters.  At my first marathon, I cried to myself on at least 5 different occasions because I saw the pain and the fear of failure and the fear of not accomplishing a goal on the face of someone I'd never met, and I started cheering and clapping and screaming my head off for that person.  And I was surrounded by lots of other fans doing the same thing. 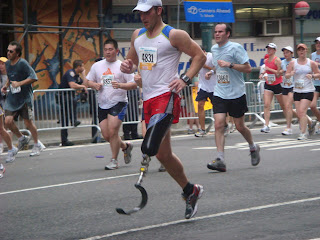 A marathon is all that is good about sports.  At the very front of a marathon, you have about 10 people who are competing against each other, but the other 25,000 people are all on the same team, and every fan is cheering loudly for every runner.

Having run in a few half-marathons in Indy now myself, I can say that the energy is like a 20 gazillion watt electrical current running through the whole city.  Whatever speed I've been running at by myself during training, I run SO much faster during the race because of all the cheering, all the music, and all the inspiration that comes from watching my fellow racers gut it out.

I run the Indy half-marathon for one reason; I run because it is an intensely special reminder that I am united with this group of people, this city, this community, and that we are so much more than just a group of people who have entered into a Hobbesian social contract with each other - we stand in solidarity together with each other.

I'm not surprised that someone hell bent on spreading fear and destroying all that is good in the world would choose a marathon because it is one of the most amazingly positive events that any city experiences each year.

The Church teaches that "solidarity" is one of the important things for Catholics to come to an awareness of - the idea that we are all one.  Obviously this is a message that runs throughout Jesus' teachings and indeed throughout the Old and New Testaments as a whole.

The Compendium of Social Doctrine of the Catholic Church states: "Solidarity highlights in a particular way the intrinsic social nature of the human person...and the common path of individuals and peoples towards an ever more committed unity" (paragraph 192) 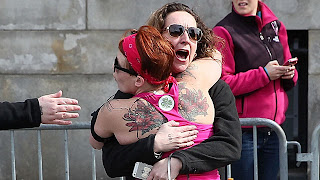 If you need a lesson in solidarity, if you feel like you aren't part of something bigger, civilly speaking, find a marathon or a half-marathon near you, and go cheer your fanny off.  You won't regret it one bit.  And don't let fear, terror, or evil keep you away.  If those things keep you away, then the bad guys have won yet again.
Posted by Father John Hollowell at 4:25 PM