What Makes a City Catholic? 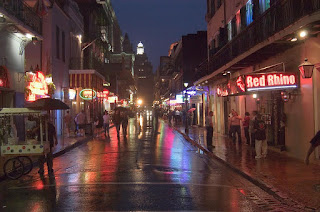 As I weaved my way through the mysterious and musty streets and sidewalks of the French Quarter as the sun was just beginning to rise, I was immediately taken back to the Eternal City I had just returned from a few weeks earlier. Although New Orleans and Rome are separated by 1,000’s of miles and founded 1,000’s of years apart, it was their similarities that provided me with some philosophical granola to chew on.

The prayers of my silent Rosary mixed with the laughter of the inebriated who still inhabited the never-closed bars of New Orleans. The smell of flowers dangling from the steel awnings that sheltered the sidewalks of the French Quarter provided a sharp contrast to the stench of trash, stale beer, and other less savory odors. The French Quarter forces itself upon you; the place can not be ignored or simply passed through. The buildings and streets are close, and give the impression of walking through narrow canyons. At the same time, the facades are mysterious because one knows there is a lot more behind the walls than meets the eye. Cars, dogs, bikes, and people all share the narrow passageways, and there is no established right of way – each encounter between person and vehicle or between car and bike must be negotiated with eye contact and even sometimes conversation. Restaurants blend in with apartments, and those blend in with shops.

Rome is a strikingly similar city. The streets are narrow and the facades stretch to the sky. One is lulled into thinking that the dirty and worn facades tell the whole story of the city, until one walks past an open gate at street level, and a garden with fountains and ferns and fruits can be glimpsed, and it is as if the city reveals to you a secret about the true nature of itself – and it tells you “there is more here than meets the eye.”

The streets of Rome are dirty and are not laid out with any semblance of order. Most Romans are simple people – neither destitute nor terribly important in the eyes of the world, and they seem to scoff at the busyness and the frenetic pace one finds in the suburbs. As in New Orleans, one can’t help but rub shoulders with people. High-powered mopeds fly down narrow side streets as do bikes and pedestrians and pets and compact cars.

New Orleans and Rome are two of the most “Catholic” cities in the world, and the question I mulled over on my morning walks was “why?” What makes a city (or any other place – a school, a home, a community) earn the adjective “Catholic”?

One of the key components seems to be the aspect of “mystery”; of realizing that there is more to the city than meets the eye. Rome and New Orleans are both “sacramental” cities in the sense that there is so much more going on beyond what one grasps during a day trip.

Another key similarity between the cities seems to me to be the idea that when navigating through downtown Rome or the French Quarter, the Body of Christ, as revealed through other people, is unavoidable. Pope Benedict once noted that we love to tell ourselves that we are self-sufficient, but he goes on to note that this is deception of the highest order. We are not self-sufficient – we need others and we rely on others – and rubbing shoulders with humanity helps drive us out of ourselves and it forces us to think about the fact that humanity is bigger than ourselves. Regardless of what one thinks of the author Graham Greene, his depiction of this bustling Body of Christ in his novel The Power and the Glory is spot on. As the priest-hero of Greene’s novel is forced to spend a night in a prison cell with lots of other people, the priest slowly realizes the true nature of the Body of Christ as some of his cohabitors are mentally ill, some are sinners, and some are saints. When the priest first enters the cell, he has to skillfully maneuver himself so as to not step on people as bodies and limbs bump up against one another in the crowded cell. Greene writes at the end of the evening that the priest “was touched with an extraordinary affection. He was just one criminal among a herd of criminals…He had a sense of companionship which he had never experienced in the old days when pious people came kissing his black cotton glove.”

Another key component to the two cities would have to be the fact that one encounters sin face to face while visiting. A city does not need to be sinful in order to be Catholic, but neither Rome nor New Orleans tries to white-wash the sins of its people in some sort of moral cover-up which would just be a lie. There is no fake moral sterilization and thus there is no ability to lie to oneself about the forces struggling for the souls of the cities inhabitants. Catholicism has at its core the idea that good is actually battling evil here on earth right now everywhere. Places (communities, churches, cities, homes, schools, etc.) that try to deny this and look the other way and lie to themselves about the presence of evil ultimately only help the Devil remain exactly where he would like to be – in the shadows. You can’t walk through the French Quarter without seeing the absolutely destructive power of alcohol addiction; you can’t turn the corner without encountering voodoo and palm reading; prostitutes and strip clubs are not relegated to the back allies but hold the prime real estate; drugs are not hard to acquire in the French Quarter, and yet amidst the evil one finds good people and the Church is present there with Churches and schools and ministries. Some would write off New Orleans, as some have surely written off the different Roman civilizations through the millennia, written them off as being over run by evil and thus uninhabitable for good people – but the Church has persisted in those places and continues to see the possibility of redemption for even the most wayward souls.

It is easy to contrast these two “Catholic” cities with most of the modern cities that we encounter throughout the world. Most modern cities are efficient, clean, and sterile. The streets are wide and one can quite easily navigate through one’s day without really having to rub elbows with humanity. The mysterious has been pretty much stripped from cities today; one knows what one is looking at when one sees a sky-scraper or a Starbucks or a CVS. I wonder if we are better off for all of these contributions of modernity.

At the Catholic educators conference I attended that week in New Orleans I heard a lot about Catholic identity in schools and communities. That being said, the best presentation I witnessed that week on Catholic identity was not in the climate-controlled and spacious convention center, it was the education I got by strolling down the alleys and streets of the French Quarter and listening to her tell her stories.
Posted by Father John Hollowell at 5:33 PM