My suggestion for Pope Benedict when he starts seeking the advice of 31 year old priests: mandate that anyone who uses the phrase “Catholic Social Teaching” publicly must first receive a license to do so from the Church. 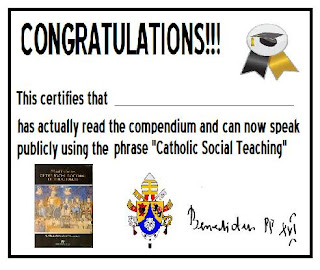 Just as chaos would soon unfold in our streets if we let anyone drive a car, so we have already seen that same affect on the spiritual highway of American Catholicism, and the carnage has not been cars but many souls who have been led astray by pop-theologians.

We will be looking at Catholic Social Teaching on here in greater detail over the course of the Summer because it MUST be reclaimed for what it is, and it is a hill that must be taken back from the omni-present “militantly anti-Catholic catholics” who seem to have been formed more by Karl Marx and John Lennon than by Pope Leo XIII and Blessed John Paul II.

A HIGHLY instructive little manual that would serve as the “driver’s ed book for those wishing to be licensed in Catholic Social Teaching” is called the “Compendium of the Social Doctrine of the Church.” It covers all the topics and pulls together two millennia of Church teaching on social issues from slavery to abortion and from worker’s rights to democracy, from economics to sociology. It is neither terribly long nor complicated.

And yet most who talk about “Catholic Social Teaching” neither have cracked it open nor do they likely even know of its existence. Click here to purchase this reference manual right now.

The first issue to be tackled by our little series is this – what the Church REALLY says about Welfare.
Posted by Father John Hollowell at 1:03 PM