Symbols are everywhere in Catholicism and some had asked for this so I thought I'd run through some of them. If you have other ideas for other symbols or phrases, email them or put them in the comment box and we'll try and figure them out. 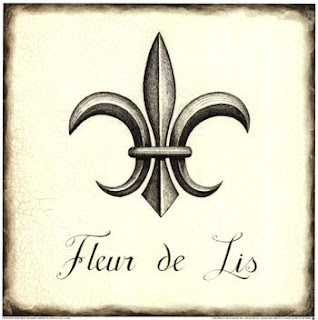 Fleur-de-Lis: The Fleur-de-Lis came to represent two things intertwined - the French Monarchy, each of the three leaves representing the different classes of French society under their monarchy, and the image also has a Marian background. "Lis" means Lilly, a flower which has long been identified with purity. The Fleur-de-Lis is also trinitarian with its three leaves as well. Because the French Monarchy has always been tied to the Catholic Church (both were simultaneously overthrown during the French Revolution) this image has appeared in many secular and Catholic places that take their heritage from the French. 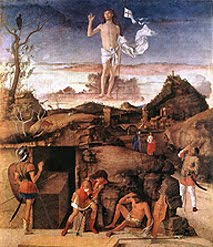 The white background and red cross featured in many resurrection pieces is representative of Christ's mingling of humanity and divinity just as water and wine mingle together during Mass. White is also emblematic of Christ's purity while red has long been the color of the martyrs (Christ having been one himself). The image is also tied strongly to the crusades, and many soldiers wore white tunics with the red cross, and the image also appears on shields in much of the artwork surrounding the Crusades. Some seem to believe that the banner appears in resurrection art because it was first ACTUALLY used in the Crusades, while others say the crusaders used the design because it first appeared in paintings. One source notes that: "Pope Eugenius gave them the right to wear a scarlet cross over their hearts, so that the sign would serve triumphantly as a shield and they would never turn away in the face of the infidels': the red blood of the martyr was superimposed on the white of the chaste." (Melville, La Vie des Templiers, p. 92.)

Chi Rho - in 313, as "barbarians" were preparing to sack Rome (most historians agree that the Romans were much more "barbaric"). The pagan emperor Constantine saw a vision in which Christ showed Constantine the Chi Rho - the first two letters of Christ's name in Greek (XRISTOS), and Christ told Constantine "in this sign you will be victorious." Constantine had his soldiers paint the above symbol on their shields and the Romans proceeded to successfully defend their city in a miraculous military victory. Constantine promptly consecrated the realm to Christ and the Church, although Constantine himself, as was popular at the time, wasn't officially baptized until he was on his death bed (in order to prevent the chance of post-baptismal sins condemning a person to Hell).

"IHS" - A couple of different possibilities for this symbol are out there. The most popular is that I, H, and S are an abbreviation of the Latin phrase that Christ spoke to Constantine - "In Hoc Signo Vinces" (In = in, hoc = this, signo = sign, vinces = you will win). Others attribute it to the first three letters of "Jesus" in Greek - IHSUS. The Catholic Encyclopedia notes that abbreviated monograms were quite common throughout the world of the early Church.
Posted by Father John Hollowell at 3:44 PM