Should We Have Holy Water in Lent? How About Baptisms? 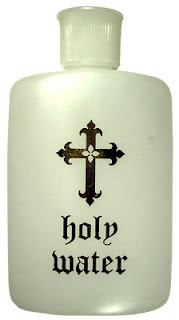 As I have been hearing about some places removing holy water from their fonts again this year for Lent, I was taken back to the book I just finished - The Rite by Matt Bagglio. Is Holy Water just something that we should do without for a while? Satan and his minions certainly would seem to say yes because the book has numerous exorcisms, and almost all of them start out with the possessed person feeling normal, but when the priest sprinkles holy water on them, the demon can't hide, he lashes out, reveals his presence, and the exorcism begins in earnest. Uhm, thanks for the symbolism, but I'll continue to take my holy water at Church!

Father Z's blog has a great post about the inanity of removing holy water from the fonts of churches. I include some snippets below:

"Holy Water is a power weapon of the spiritual life against the attacks of the devil.

Holy water is a sacramental. It is not a toy, or something to be abstained from, like chocolate …. which is the stuff of a childish Lent.

Holy Water is not to be removed from fonts until after the Mass on Holy Thursday."

Fr. Z also notes that the Vatican helped clarify this a few years ago

"[From the Vatican] - The removing of Holy Water from the fonts during the season of Lent is not permitted, in particular, for two reasons:

1. The liturgical legislation in force does not foresee this innovation, which in addition to being praeter legem is contrary to a balanced understanding of the season of Lent, which though truly being a season of penance, is also a season rich in the symbolism of water and baptism, constantly evoked in liturgical texts.

2. The encouragement of the Church that the faithful avail themselves frequently of the [sic] of her sacraments and sacramentals is to be understood to apply also to the season of Lent. The “fast” and “abstinence” which the faithful embrace in this season does not extend to abstaining from the sacraments or sacramentals of the Church. The practice of the Church has been to empty the Holy Water fonts on the days of the Sacred Triduum in preparation of the blessing of the water at the Easter Vigil, and it corresponds to those days on which the Eucharist is not celebrated"

You can read the entirety of Fr. Z's post by clicking here

This also raises the insanity of not baptizing during Lent. This comes from nowhere other than some liberal Catholics deciding it would be nice symbolism to wait until Easter. Someone who goes for not doing baptisms during Lent can't really believe that Baptism is what we believe it is as a Church. Canon 867 paragraph 1 notes:

Parents are obliged to take care that infants are baptized in the first few weeks. As soon as possible after the birth or even before it, they are to go to the pastor to request the sacrament for their child and to be prepared properly for it.
Posted by Father John Hollowell at 11:43 AM