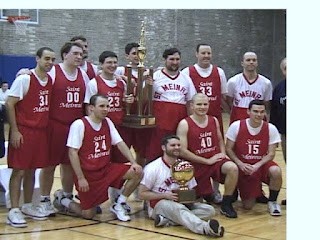 As our minds turn towards hoops again this Spring I thought I'd share a great Catholic hoops story.

I've had the good fortune of getting to be a part of some great athletic teams that have had some memorable accomplishments. I've played and coached football state championships, got to coach some city track championships, etc. I say this not to brag but only to say that I think my favorite memory involving athletics was the St. Meinrad basketball team that won the seminary shoot-out in 2006.

I know, I know, I hear you snickering...seminary basketball? When I first heard of the tournament when I showed up at St. Meinrad, I chuckled myself. I pictured rec-spec wearing theologians with their shorts pulled halfway up their chests trying their hardest to dribble with only one hand all while constantly smiling and uttering Scripture quotes to cheer on the OTHER team. 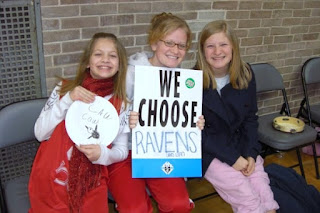 With those images ingrained in my mind I still to this day remember walking into Mundelein Seminary's gymnasium a few weeks later for my first Mundelein Shootout. The first thing I noticed was that the gym was PACKED! They had brought in extra seating at both ends of the court, and the crowd was big and spirited. One seminary that was playing when I walked in had brought all 50 of their guys and a mascot! The visions that I had of going "Michael Jordan" on a bunch of seminary nerds was also shattered because within minutes of walking in I saw a guy dunk the ball! I was also very impressed by the quickness and athleticism of a lot of the guys on the court.

That first year of the tourney, St. Meinrad got POUNDED! The only team we beat was a seminary of about 15 Franciscan brothers, but most of the other schools whipped us. The next year we played better, but we were still demolished by a couple of better teams.

My third year in the seminary saw some big changes. Ryan Harpole entered St. Meinrad in the fall of 2006 from the diocese of Owensboro. He had grown up poor, and, as he said, all he did was shoot hoops as a kid. He said he probably shot about 4,000 shots a day and to see him in action you would believe it. He NEVER missed a shot - it was like watching Larry Bird. Steve Hohmann also joined our team, and he was a big tall center who loved to get rebounds. In addition to the new guys, seasoned veterans (all now serving as priests) Fr. Matt Lowry, Fr. Paul Sullivan, and Fr. John Parks, all priests from Phoenix, Fr. Brian O'Brien from Tulsa (nicknamed sure-shot by my cousin) and myself all got better playing against each other a couple of times a week. 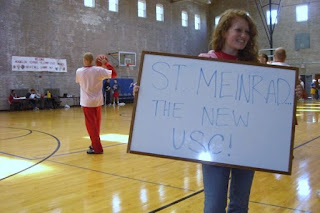 Despite the new additions, we were still heavy underdogs. St. Meinrad, at the time, had about 80 guys in the seminary, but some of the other seminaries had double that number of seminarians. Mundelein, the New York Yankees of seminary basketball, had 200-250 seminarians. Mundelein wins the tournament almost every year because they have so many guys to choose from. Notre Dame's seminary was also a perennial power because they had a couple of former division 1 football players on their squad.

Our championship hopes were not helped by the fact that we lost our first game on Saturday morning to Kenrick seminary. Because it was a double elimination tournament, we were not knocked completely out, but our road was going to be very difficult. We would have to win 4 more games THAT DAY just to make it to the championship game Sunday morning.

Needless to say the St. Meinrad Ravens pulled out 4 gritty wins only to have to face a well-rested Mundelein Lakers (their seminary is surrounded by a couple of lakes) squad who also enjoyed home-court advantage. Mundelein had us by about 4-5 inches at each position and all in the gym knew it was Mundelein's game to lose. Amazingly, we jumped out to a 12 point halftime lead, but Mundelein made their move and actually took the lead with a few minutes to go. It began to look like our title hopes were going to be dashed, but Fr. Brian O'Brien hit a gigantic three pointer to get us going again, and, as time expired, our defense kept them from scoring to give us the two point win!

The tournament is hosted every year by the Knights of Columbus and continues to be an awesome opportunity for future priests from around the country to get together and build fraternity. If you are ever in Chicago the last week of January, stop in at Mundelein for a great Catholic event.

Here is a highlight video produced by Fr. Matt Lowry along with a "BONUS" feature - the last five minutes of the championship game. Enjoy

Posted by Father John Hollowell at 10:29 AM