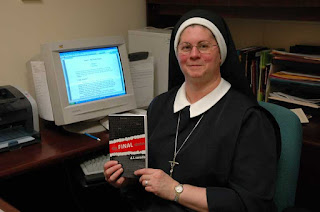 The Star finally had a pro-life letter on its oped pages today, about 2 weeks into their otherwise hostile-to-life slate of pieces they have been publishing. Sr. Diane Carollo, an avid and tireless defender of the rights of the unborn who heads up the Archdiocesan Pro-Life office wrote a great letter which can be read by clicking here. Planned Parenthood better watch out because as any priest will tell you - "Don't mess with Sr. Diane!"

On a down note, two days ago saw the publishing of a letter from several CEOs from the Indy area asking our state not to pass a constitutional amendment defining marriage as between one man and one woman. Lilly's CEO, John Lechleiter, is rumored to be Catholic but one has to wonder how he squared that letter with his Catholic Faith. The letter makes the case that we would lose out on jobs if we passed the amendment, but given Lilly's recent layoff of thousands of employees, one would think losing out on new jobs would be the least of Lilly's worries.

The letter also seems to imply that potential employees would be thinking to themselves, "Well, I'd love that job in an economy where unemployment is 10%, but that state is bassackwards because they have made what is already a law a part of their constitution." Come on now, that is quite the stretch. Marriage is already currently defined as a law between one man and one woman in Indiana, the bill would only start the process of making it a constitutional law in Indiana so that activist judges could not at some later date overturn it.

Lechleiter needs to make the point instead that professionals out there are saying to themselves in a climate of 10% unemployment "I will take that job here in Indiana because, although it is a law currently that marriage is defined as between one man, at least it isn't written in the Constitution. The moment it becomes a Constitutional law, I'm walking and taking my talents to a state that doesn't have it in their constitution." Does he really think a significant number of people think that way?
Posted by Father John Hollowell at 9:40 AM