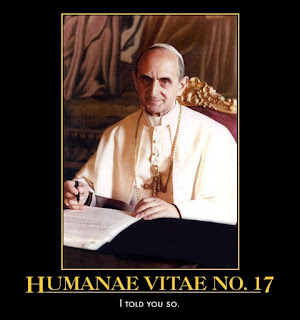 Of all the fake inspirational posters I've seen, this one is my favorite by far!

In case you are wondering what Humanae Vitae #17 said, it says:

"17. Responsible men can become more deeply convinced of the truth of the doctrine laid down by the Church on this issue if they reflect on the consequences of methods and plans for artificial birth control. Let them first consider how easily this course of action could open wide the way for marital infidelity and a general lowering of moral standards. Not much experience is needed to be fully aware of human weakness and to understand that human beings—and especially the young, who are so exposed to temptation—need incentives to keep the moral law, and it is an evil thing to make it easy for them to break that law. Another effect that gives cause for alarm is that a man who grows accustomed to the use of contraceptive methods may forget the reverence due to a woman, and, disregarding her physical and emotional equilibrium, reduce her to being a mere instrument for the satisfaction of his own desires, no longer considering her as his partner whom he should surround with care and affection.

Finally, careful consideration should be given to the danger of this power passing into the hands of those public authorities who care little for the precepts of the moral law. Who will blame a government which in its attempt to resolve the problems affecting an entire country resorts to the same measures as are regarded as lawful by married people in the solution of a particular family difficulty? Who will prevent public authorities from favoring those contraceptive methods which they consider more effective? Should they regard this as necessary, they may even impose their use on everyone. It could well happen, therefore, that when people, either individually or in family or social life, experience the inherent difficulties of the divine law and are determined to avoid them, they may give into the hands of public authorities the power to intervene in the most personal and intimate responsibility of husband and wife.
Posted by Father John Hollowell at 9:15 PM