Are You a "Conservative Priest"?


“Every scribe who has been instructed in the kingdom of heaven brings from his storeroom both the new and the old.” (Matthew 13:52)
Posted by Father John Hollowell at 10:14 AM 4 comments:

The Pope is Coming to the USA Next Year!!!!

Archbishop Chaput announced that Pope Francis will be visiting the USA in 2015.  Next year will see the 2015 World Meeting of the Families in Philadelphia from September 22-27th.

Catholic News Service has the whole story.  Click here to read the full story, and keep praying for the Holy Father and our Church in the US! 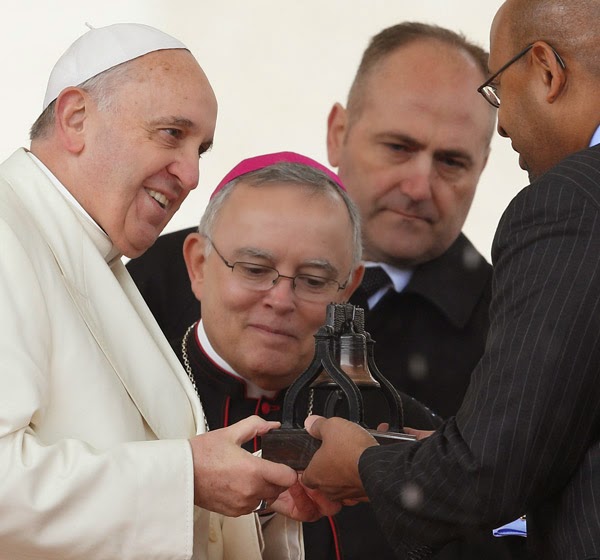 Posted by Father John Hollowell at 11:16 AM No comments:

Courage Releases Their Film on Homosexuality and Catholicism

Contraception, Francis, and the Holy Spirit

1) There is a general fear that if we trust the Holy Spirit, then we're all going to turn into a bunch of relativistic Stevie Nickses running around in a drug-induced trance with tambourines and praising the gods of a bygone era.  Pope Benedict acknowledged that it is understandable to be cautious when we first hear the Holy Spirit, not because it is right to fear the Holy Spirit, but because so much craziness has been done TO the Church and so many wounds have been inflicted upon the Church by those claiming to be operating under the influence of the Holy Spirit.

That being said, we should never fear the Holy Spirit.  The Holy Spirit will NEVER lead us anywhere BUT to Christ and to His Church.  "The Spirit will lead you to ALL truth." (John 16:13).  We can't stifle the spirit because some loonies have tried to hijack the Spirit.  Instead, we must reclaim the Spirit, and show what a life lived in the Spirit looks like authentically!

2) Am I saying in this homily that catechesis (passing on the particular truths of the Faith) is not important?  BY NO MEANS!  Of course knowing our Faith is important, and we have to DOUBLE or TRIPLE our efforts in this area.  Some become lukewarm BECAUSE they know nothing about our Faith.  However, the thing we have to LEAD with is an authentic encounter with Jesus Christ, and the Joy and Peace that he offers.  The Holy Father is rightly saying that we should never give someone a pamphlet on contraception the first time this person shows up asking about Catholicism.

Thanks to all of our catechists who are working so hard to hand on the Truths of our Faith.  Keep up the great work!
Posted by Father John Hollowell at 10:46 AM 3 comments:

Pope’s Saint John Paul II and Benedict XVI both talked extensively about democracy and capitalism.  To sum it up briefly – democracy seems to be our best form of government, but just because you have a republic or a democracy, that does NOT mean that things are going to work out.

A DEMOCRACY TAKES VIGILANCE…DAILY…ALL THE TIME

The Truth will not prevail automatically

First principles can be rejected and new ones enshrined and democracy can become totalitarian very quickly.

What are you doing to help shape our democratic system?
Posted by Father John Hollowell at 8:52 PM No comments:

The Catholic Mass and the Bible 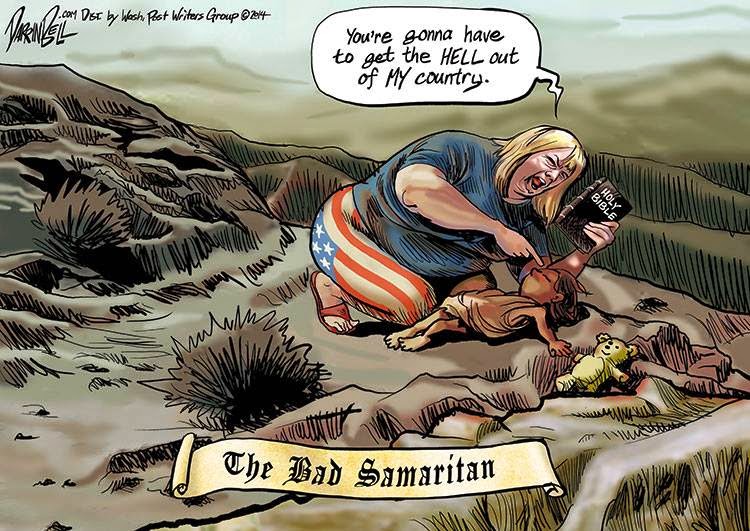 We've got a lot of smart people in this country - we can surely figure out a way to help people live here who want to be here.
Posted by Father John Hollowell at 12:43 PM No comments:

As I've admitted on here elsewhere, I was a math major.

Euclid's Geometry is based on five axioms.  These axioms are used to build the whole system.  If you change one of the axioms (i.e. you say "two parallel lines CAN intersect") then the ENTIRE system changes, and it looks COMPLETELY different than Euclidean Geometry.

You can change one of the axioms, but the change echoes throughout the system, producing a completely new system.


Marriage between a man and a woman is an axiom of our society.  It is assumed to be true and everything hinges on that as a foundational principle.  There are a few other "axiomatic" principles that our society is founded on.  The Church notes that a just society is one in which:

1) the dignity of every human life, from conception to natural death, is honored
2) religious freedom is granted
3) the right to work is respected
4) marriage is between a man and a woman


IF YOU STOP UPHOLDING THESE VALUES...THE SYSTEM CRASHES...DEMOCRACY EXISTS NO MORE

That's why the Church says:

"If, from a legal standpoint, marriage between a man and a woman were to be considered just one possible form of marriage, the concept of marriage would undergo a radical transformation, with grave detriment to the common good." (Compendium of Social Teaching, paragraph 228).


Here's the point - we're not saying, as Catholics, that society needs to listen to us because God is great and "you all need to do what God says"...

The Catholic Church says, as a political advisor, IF YOU CHANGE YOUR UNDERSTANDING OF MARRIAGE, YOUR SOCIETY WILL NOT ENDURE


If you change one of the foundational axioms, you change EVERYTHING...and when you change an axiom, what you soon have is a system that looks NOTHING like what you had before

Posted by Father John Hollowell at 8:37 AM 26 comments:

The dignity of the human person, rooted in his or her creation in the image and likeness of God, is a fundamental principle of Catholic social teaching. The Church upholds the dignity of every human person, including persons with same-sex attraction, whom we accept and love as our brothers and sisters.At the same time, the Church upholds the dignity and sanctity of marriage as a natural union established by God between one man and one woman, intended towards the establishment of a family in which children are born, raised, and nurtured.  This is not simply a matter of belief. It is at the very heart of the nature of marriage. Thus, it is not within the power of any institution, religious or secular, to redefine marriage since it is God who is its author.Today's decision by Richard L. Young, Chief Judge United States District Court, Southern District of Indiana,  to redefine the institution of marriage as an emotional partnership between two consenting adults regardless of gender ignores this fundamental and natural truth of marriage and opens its definition to the whims of public opinion.With deep respect for all our brothers and sisters, we nevertheless see no basis in law or in nature for any definition of marriage that seeks to expand it beyond that of a covenant between one man and one woman.  Our position on this matter seeks only the common good of all men and women as well as the health and well being of families.As pastors, we will continue to preach and teach the truth of marriage as it is ordered by God, encouraging all people to embrace the fullness of that truth, while upholding the dignity of all persons.  We will continue to work through the Indiana Catholic Conference to encourage our legislators and judges to uphold this truth as well.  We urge all involved in this issue to conduct themselves with mutual respect and civility in public discourse.Most Reverend Joseph W. Tobin, C.Ss.R., D.D.Archdiocese of Indianapolis Most Reverend Christopher J. Coyne, S.L.D.                                Archdiocese of IndianapolisMost Reverend Charles C. Thompson, D.D., J. C.L.Diocese of Evansville                 Most Reverend Kevin C. Rhoades, D. D.    Diocese of Fort Wayne-South Bend   Most Reverend Dale J. Melczek, D.D.Diocese  of GaryMost Reverend Timothy L. Doherty, D.D., Ph.D.Diocese of Lafayette-in-Indiana
Posted by Father John Hollowell at 9:58 AM 22 comments:

People leave God because of false images they have of God.  Maybe we're part of the problem
Posted by Father John Hollowell at 8:26 AM No comments:

"You will be a beautiful as your mother takes care of you
Your feets are very small and your hand is very small
Everything is small because you're little
You always said v, you love Olivia the big sister
Your legs are little
You love your baby

Here, you can have the baby back!"
Posted by Father John Hollowell at 6:17 PM 1 comment:

Important Anti-Trafficking Work by the USCCB!

Posted by Father John Hollowell at 11:43 AM No comments: