As we enter into National Migration Week, I would say “woe to those on EITHER side who perpetuate the falsehood that you are either against welcoming anyone or for open borders. People on BOTH sides do this and it is terrible! “Oh, you aren’t for open borders, and you say a country has a right to have immigration laws that regulate and control and oversee immigration... I can’t believe what a cold and heartless person you are.” This is non-Catholic. “Oh, you think we should do all we can to treat those seeking immigration or asylum humanely, and that our communities should work to be welcoming to refugees and immigrants? How much is Soros paying you to work for open borders?” This is non-Catholic.To act like there are only two options in the immigration debate is wrong, simplistic, and prevents anyone from working towards the CATHOLIC middle ground which exists BETWEEN the two extremes, and is not a fixed point but requires all of us to harness prudence! 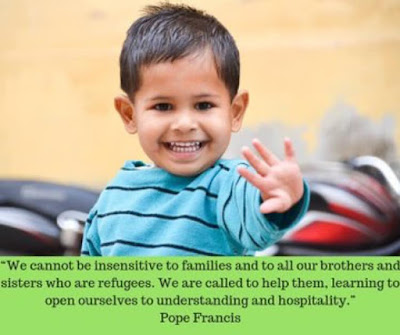 Posted by Father John Hollowell at 11:19 AM