This is such sad teaching from Father James Martin, SJ 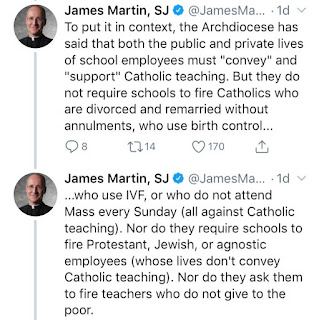 Raise your hand if you understand the difference between committing a sin and making a PERMANENT AND LIFELONG PUBLIC VOW to live in contradiction to the Church.

NB: Some have been asking about the similarity of same sex unions with those who are divorced and remarried without having their first marriage annulled.  The situations are similar.  Generally speaking, the approach ought to be the same:

2) are you willing to work with the Church to put yourself in a situation where you are okay in the eyes of the Church?

(soon to be Saint) Cardinal John Henry Newman taught about people who teach things in contradiction to the Church:
“Such men act, in the solemn concerns of religion, the part of the self-sufficient natural philosopher, who obstinately rejects Newton’s Theory of Gravitation, and endeavors, with talents inadequate to the task, to strike out some theory of motion by himself.”