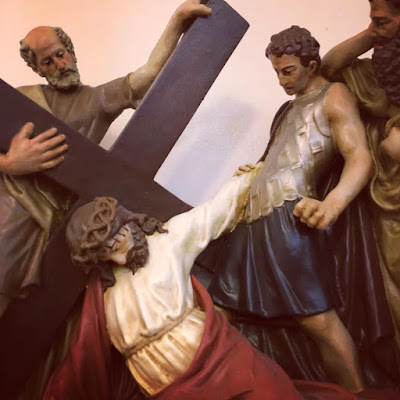 Meditation from Pope Benedict: "The tradition that Jesus fell three times beneath the weight of the Cross evokes the fall of Adam — the state of fallen humanity — and the mystery of Jesus’ own sharing in our fall. Throughout history the fall of man constantly takes on new forms. In his First Letter, Saint John speaks of a threefold fall: lust of the flesh, lust of the eyes and the pride of life. He thus interprets the fall of man and humanity against the backdrop of the vices of his own time, with all its excesses and perversions. But we can also think, in more recent times, of how a Christianity which has grown weary of faith has abandoned the Lord: the great ideologies, and the banal existence of those who no longer believing in anything, who simply drift through life, have built a new and worse paganism, which in its attempt to do away with God once and for all, have ended up doing away with man. And so man lies fallen in the dust. The Lord bears this burden and falls, over and over again, in order to meet us. He gazes on us, he touches our hearts; he falls in order to raise us up."
Posted by Father John Hollowell at 3:28 PM