When NFL players shy away from masculinity...watch out

Quick back story for non-football fans


The point here: Jim Harbaugh is the type of coach that, in sports terms, is a miracle worker.  The results above are UNHEARD OF!!!

If a good coach takes over a program, it ALWAYS takes a couple of YEARS to get good and Jim Harbaugh does it in a few weeks.


It's also important to know that Jim Harbaugh is known for his intensity.  The Onion had a hysterical fake newspaper story on Harbaugh the other day - 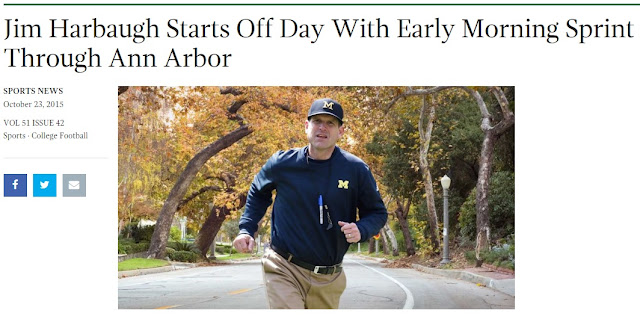 
Here's why I mention all this - last year, when Harbaugh was coaching the 49ers, reports began to surface that players didn't like playing for Harbaugh because he was too intense, too into it, etc.

Your one job, in the NFL, is to WIN GAMES, and Jim Harbaugh does that for you, and you COMPLAIN that the guy is too intense?


Fast-forward to this year.  I sat down the other night and watched 10 minutes of the 49ers and it was an absolute disgrace to the game of football.  They were awful in every conceivable way, and it made it really easy to turn off.  That night the 49ers, when I stopped watching, were having one of the worst games in the history of the NFL


The 49ers were a great team under Harbaugh, one of the best, but the players were complaining that Harbaugh was too masculine.  And once the players got their wish, and Harbaugh was let go, the 49ers instantly became irrelevant and a joke, just like they were before he arrived.


Masculinity is mocked in a culture that thinks of gender lines as blurry (or at least wants them to be blurry).  When NFL players, who are supposed to want to win, and who are supposed to be hard-nosed and tough, when they start complaining that a guy is too masculine, we should probably start to prepare for the end of the world, or at least the invasion of our country by men who DO want to fight


Authentic masculinity is something that should be praised.  Intensity, hard work, discipline, etc. - these are helpful traits in our world, and we should celebrate them and hold them up when they are lived well.


I worry that cultures start to get soft and squishy and afraid of masculinity when things are plush, no one is invading, and everything is comfortable.  The day may soon come where we will once again look around and hope real men will step forward.  If that happens, I hope there are a few left in our country.  Evidence suggests that the 49ers locker room would not be a good place to start looking.
Posted by Father John Hollowell at 9:15 PM