If you haven't seen it, stop reading!

Okay, there's a couple of comments I have about this awesome film

Just as the Catholic Church believes that beauty (artwork, beautiful churches, beautiful music, etc.) draws people in, so did the creators of "Gravity" realize the same thing.  People are flocking to the film because of its "cinematography" and its "beautifully stunning images"...and that is fine.  Beauty is done for its own sake, but it is has a side benefit of also drawing in people who otherwise would not stop in.  For example, a "drunk" or a young man who has no morals and is sleeping around with every girl in high school would never stop in to St. Peter's Basilica to go to Mass, but they might to check out the beauty they've heard about.  Gravity is beautiful, and so lots of people are going to see it.  The Church is called to cultivate beautiful things because 1) beauty is a good thing and 2) beauty attracts even heathens.


2) "Gravity" Seems to be All About Baptism

I know, I know, the Church reads way too much into stuff.  Maybe the filmmakers wanted to just make a film about space chaos and a successful crash landing...but I could not help seeing a deeper symbolism to the film.


First of all, you have the floating around in space.  It can't be an accident that in what little dialogue the film has we learn that Sandra Bullock doesn't believe in God, or at least that she's never prayed.  A life apart from God, whether intentionally rejecting him through sin or from simply not knowing Him, is like zero gravity existence....things just float.  There is no reference point, there is nothing that I am tethered to...and every child wants to be untethered from his parents...until it happens.

Similarly, zero gravity floating, coasting, just existing...it is livable until the chaos hits.  When all the pieces of debris slam into Bullock and the crew, all Hell breaks loose.  Merely existing...floating along...just doing enough to get by...is fairly quiet until tragedy strikes, and then it is utterly disorienting.  Tragedy and adversity is hard enough when you know which way is up, but when you have nothing to orient your life by, no "ground to stand on" then it is scary as Hell! 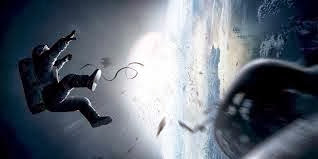 Secondly, "Gravity" is about Baptism because Bullock crashes into water, is starting to drown, and there is the beautiful scene where she has to shake off all of her space suit that is weighing her down, so that she's basically naked (nothing but her astronaut underwear).  That's baptism folks.  We are submerged in water (in the early Church you were naked) and then you came to the surface a Christian.

Thirdly, Bullock floats to shore, but she struggles to stand since she hasn't used her muscles in a while.  When we are new Christians, we stumble out of the stall like a newborn calf.

Forthly, the movie ends with Bullock looking at the mountain and the land and the beach as if it is a place she always knew (Earth) but is now "seeing things for the first time," as the Black Crowes sing.  When we are baptized, we are still part of the world that we knew before, but at the same time the world starts to take on a new look.

Chesterton says it best: "What could be more glorious than to brace one's self up to discover New South Wales and then realize, with a gush of happy tears, that it was really old South Wales?"  This is a fascinating point - what an awesome realization when you see the same place you've always lived in a completely new way!  That is precisely what happens to the Catholic...and indeed for saints this "seeing the world in a fresh way" happens quite frequently not just throughout one's life, but throughout the DAY!

I think anyone who is preparing for the Easter Vigil Baptism into the Church should check out Gravity.  It is both beautiful in and of itself, but also seems to have a beautiful analogy to the Sacrament of Baptism underneath the surface of the story.
Posted by Father John Hollowell at 8:35 PM