A little poetry.  I dabble.

You ever have an idea pop into your head that you knew you had to get down on paper?  This was one of those.

I know alliteration is the sign of a JV poet, but I'm a jv poet, so I'm okay with it.

I think the alliteration is actually helpful to what is going on in the poem.


At Meribah, Moses got so fed up with the people complaining that he hit the rock with his staff, and despite it all, the water flows from the rock. 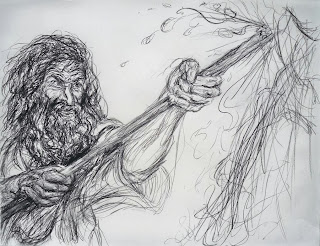 The thing that "struck" me with this incident is that from this long line of defeat and sin, the sin of Moses, the sins of the people, the fact that the Earth has been tainted from sin, from all of this flows...water!  A miracle, but also a miracle that teaches us something larger - that God brings out of the "mire and the muck" a stream that renews.  He literally brings it out of the "muck and mire".  I used all "m's" because it feels like it connects all of the sin, dirt, Moses, the complaints, the failures, the wars, etc. - it is all united by failure and sin, but the last word, water, is "M" upside down - failure turned on its head.

So that's what is going on, and now I'll share it with you.

The Waters of Meribah

Mounds of Marble made from the mud and mire of Meribah and Massah
Muck and mucus and marshes and maggots mixed and mangled and made miniscule
Ministers, menservants, millionaires, and magicians are mummified and mutilated
Millenia mashed into mere millimeters of mudstone

Moses the murderer moves mightily to mitigate the masses…
Men mesmerized in merriment…
From the muted and motionless millions of mistakes, the murders, the massacres,
and the moral madness of men…
Water!
Posted by Father John Hollowell at 10:01 AM