Film on Catholic Persecution is Persecuted 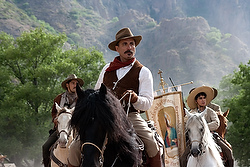 "For Greater Glory" is a film that debuts this weekend about one of the most beloved and oft-told stories of Catholicism on our North American continent.  It is the story of Catholic persecution in Mexico, and the story of the uprising in the face of the persecution.  This is actually not a review of the movie because I haven't seen it yet (hopefully this weekend). If you want to read a good review of the film, feel free to click here.

This morning when I retrieved the Indy Star (I'm not the pastor so I can't cancel the subscription :) the review was deeply saddening, but shame on me for not expecting it.  The review, I believe from some national syndicate, accused the film of whitewashing history and making it seem like Catholics are good and that the government was all bad.

I am a movie junkie (or rather I should say a fan of good movies) and I read numerous reviews every weekend, and have done so for many years.  I have never read a review in my ENTIRE life that has been done a movie "based on true events" that has bemoaned every "misrepresented" piece of minutiae in the entire film.  Let's look at some films that deserve to be discussed with the same critical eye:

Eilzabeth (and it's sequel) - I've never heard anyone but a seminary professor talk about the utterly ridiculous retelling of the story of Queen Elizabeth I of England (film was nominated for "best picture" by the Academy). In doing some quick research, the Buffalo News review was quoted in the NYT review as noting that the film was "resolutely anti-Catholic" complete with a "scheming pope" and that "every single Catholic in the film is dark, cruel and devious" (so there was SOMEBODY else warning of its anti-Catholicism after all).  How does a film with so many historical inaccuracies and blatant historical face-lifts get nominated for an Oscar?

The Patriot isn't even based on a real person, the battles are fictional combinations of real battles, and virtually nothing in the film, besides the overall theme of there being a war between Britain and the U.S., is true.

Gladiator is EXTREMELY loosely based on fact.  Marcus Aerilius, portrayed as a paragon of virtue, was one of the most vicious persecutors of Christians, and, furthering the irony, the film actually has a deleted scene that decries the persecution of Christians in the arena.

Another "everything historically inaccurate makes Catholics look bad film" that jumps to mind would be the Crusade movie "Kingdom of Heaven" with Orlando Bloom.

I know I spend a lot of time on this blog pointing out anti-Catholic bias, but for goodness sake - it seems to be everywhere.  How do movie reviews across the country nit-pick at "For Greater Glory" while those same writers turn around and routinely offer awards to films that are far more inaccurate, usually most egregiously inaccurate in order to be ANTI-Catholic?

I was happy to come across movie reviewer Brent Bozell's take on "For Greater Glory," and he also had some good comments towards his fellow film critics who are suddenly and "unexpectedly" dismayed by historical inaccuracies.  He notes:

"Just the idea of [the film showing Catholicism in a positive light] brings out the worst in the secularist press. Slant magazine pans it as a film “that gives the screen epic a bad name.” It attacks the “solemn speechifying,” the “overstuffed cast of characters,” the “half-baked material,” and given “this religion is specifically Catholic… [the movie] …makes the material a tough sell.” When Garcia’s character ultimately converts to Christianity, “we’re back to embracing a worldview where the implied mandate to practice Catholicism feels near as onerous as the inability to do so.”

But how historically accurate is this “implied mandate to practice Catholicism”? Here’s a hint. Slant dismisses “a whole host of bathetic subplots” claiming “its martyrdom fetish reaches its grotesque nadir when a young boy dies rather than make the most token anti-Catholic gesture.”

As for the alleged mushy effusiveness and the martyrdom fetish, there are some historical facts. Over 90,000 died. Dozens have since been canonized by the Church, including 25 by John Paul II alone. The young boy was Jose Luis Sanchez del Rio, who was tortured with his heels slashed before being made to walk to his execution. “He cried and moaned with pain,” stated an eyewitness And then he was shot dead.

The “most token anti-Catholic gesture” which would have saved his life was his refusal to shout “Death to Christ the King,” instead proclaiming “Viva Cristo Rey!”

It is still illegal to celebrate Mass outdoors in Mexico.


Read more: http://newsbusters.org/blogs/brent-bozell/2012/05/29/bozell-column-viva-cristo-rey#ixzz1wZhNJAsK
I'm really pumped to go see the film, and I hope you are as well.  Don't let some arm-chair movie critic who has a sudden inclination for certain films to have every single blade of grass exactly as it really was 100 years ago in Mexico dissuade you from going to see it.  By all accounts it is a moving and VERY historically accurate piece of our Catholic history.