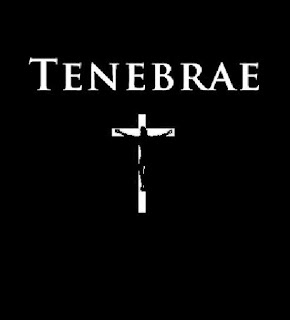 I will sometimes post articles or videos to watch on this blog but I very rarely say you need to PHYSICALLY GO to an event. This Good Friday night at Ritter, however, is our second annual Tenebrae service and I am telling you that you should go if you are able. The Tenebrae service is free and open to the public and it is the perfect ending to Good Friday.

So often people are looking for something to do on Good Friday; they are looking for a chance to spend more time in prayer with other people, and that is precisely what Tenebrae is.

Tenebrae (pronounced TEN - UH - BRAY) is Latin for "darkness" and is an ancient custom in our Church. The service has always been a chanting of various psalms and passages from Scripture that focus on the suffering and death of our Lord.

Tenebrae goes back to the middle ages, and the service was performed in Churches throughout the world. The Pope always celebrated Tenebrae in the Sistine Chapel, and one of the pieces that was written for the service was Allegri's Miserere Mei, Deus (a setting of Psalm 51), written for 9 voices. It was considered such a treasure of the Church that it was kept under lock and key for hundreds of years. The piece was finally made public when, at age 14, a young Mozart, traveling in Rome, attended the service, and then promptly wrote the music down from memory when the service was completed.

A group consisting of students in IU's School of Music, Vox Reflexa, under the direction of Mr. Ben Geier, will be performing most of the music for Tenebrae at Ritter, including the finale - the same piece that served as the conclusion for Tenebrae in the Sistine Chapel for so many years - Allegri's Miserere.

The service begins at 9 p.m. and will conclude by 10 p.m. The service is NOT a Eucharistic service, and so in no way takes the place of attending one's parish services earlier in the day on Friday.

If you have any questions please contact me. I hope to see you at Ritter, and I hope you have a blessed Holy Week!
Posted by Father John Hollowell at 12:48 PM