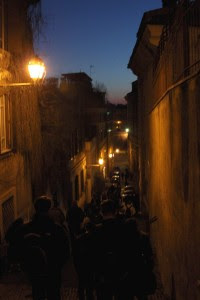 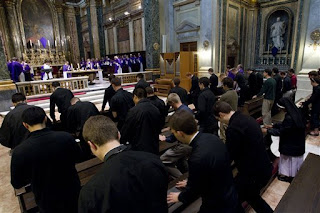 An ancient tradition in Rome is once again winding down as another Lent is in the books - a tradition that I was able to participate in while on vacation in Rome.

For each of the 40 days of Lent, there is a different Church in Rome designated as the "Station Church" for the day. All day long Masses are held in that Church in many different languages, and pilgrims pour in to the Church all day long.

The first Mass of the day is typically the English Mass, and I believe preference is given to the English Mass because the men of the North American College Seminary in Rome, as I understand it, kept the tradition going when most other languages let it slip in the recent past.

While I was in Rome over Spring Break, I was able to make the pilgrimage through the streets of Rome (usually close to an hour walk) - a prayerful experience in and of itself because you have to set out in the darkness of pre-dawn in order to get to the Church in time, and it is an awesome experience as most of the city is still dormant.

Famous Catholic author George Weigel (tied for my favorite author) actually walked the streets with us because his next book is going to be on the Station Churches and the North American College's role in keeping the flame alive.

As Fr. Z notes on his blog (read here) the A.P. actually did a fairly good story on the subject today which you can read here.

It is nice to see an ancient custom which the American Church can take a lot of credit for picking up when most others let it slip.
Posted by Father John Hollowell at 9:55 AM