A response to Chris Stefanick on the Latin Mass

I'm only posting this here because Twitter doesn't allow for nuance, and I want to use nuance. 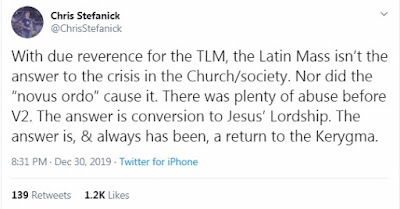 1) I agree wholeheartedly that, in one sense of the phrase, "the Latin Mass isn't the answer to the crisis".  I've spoken elsewhere about the book that I read on my retreat called Sacrilege, and how the author I think expertly points to and unpacks about THIRTY FIVE problems that lead to 2002 and 2018.  And even moving beyond the abuse crisis to what I think is the larger crisis of Faith that Chris is referencing, I agree that in both cases NO ONE THING is THE answer.

2) I also would add here that I don't know many Latin Mass people that think that if we just went back to the Latin Mass, we wouldn't be in a crisis of Faith.  There are certainly some, but most TLM'ers that I know recognize there are TONS of things that we need to keep emphasizing in order to restore the Church (insert a more theologically correct word for "restore" if that word doesn't work for you...most people know what we mean by that).


So in one sense of the tweet, I'm on board.  There are 50-100 categories (or more) of things that need tweeked/addressed/worked on in the Church.  One of those is the way Mass is celebrated.  And most TLM people that I know of prefer the TLM because they know there is almost a zero percent chance of being forced to encounter banal (and worse) celebrations of the Mass in our current day if they attend a Traditional Latin Mass.  And those same people see lots of other things that need addressed in the Church.


"Lex orandi, legem credendi" - the law of how we worship governs what we believe
Posted by Father John Hollowell at 3:15 PM