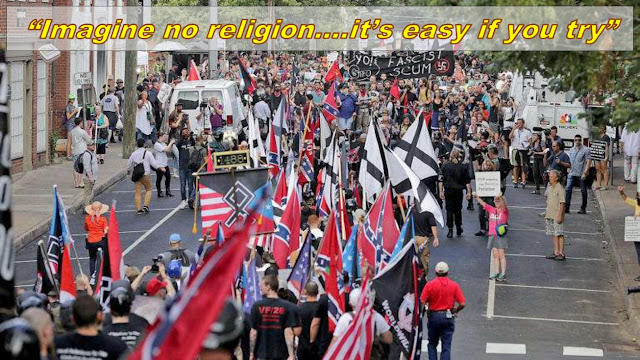 "Imagine" by John Lennon is the most naive song ever written.

I guess we can excuse him a bit in that he didn't have the same historical data that we have now, 50 years after he first yearned for a world without Heaven or Hell, without religion, without Christ, etc. but just a big happy brotherhood of people...but the historical data is now apparent for all to see.

We now know quite well what happens when Christianity is abandoned.  It is NOT some happy brotherhood of humanity.

Nietzsche was way more dialed in than Lennon.

Here's an imagined conversation between John Lennon and today's Post-Christians on the right and left:

Naive post Christian hippy: "Because haven't you heard the song by John Lennon about what the world would be like if we did it that way?"

Post-Christian alt-right/Post-Christian Communist: "I don't give a rat's rear end about any of that.  I'm here to win and defeat the enemies of my ideology."

We are beginning to see, in our own day, exactly what happens, on the right and left, when Judaeo Christianity is jettisoned.

Charlottesville was a perfect example of what is left behind when right and left are not rooted in Christ.


The idea that we can get to all the good things Christ has brought to the world without actually believing or acknowledging Christ is a fairy tale.  He is the Way, the Truth, and the Life
Posted by Father John Hollowell at 11:38 AM