This has been around for a while, but I thought we'd take a look at it. 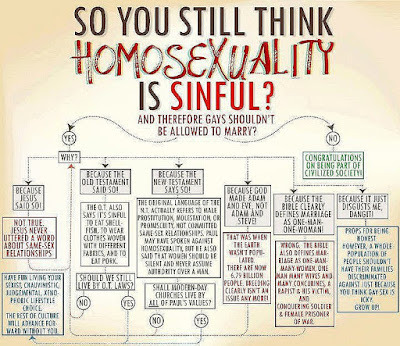 If someone shows you this and asks you want to think of it as a Catholic you can say the following:

2) Even if you mean by "homosexuality" you mean people having same sex sex, which I do think is sinful, the sinfulness of same sex sex is NOT WHY I'M OPPOSED TO GAY MARRIAGE.  I'm opposed to gay marriage simply on secular grounds - I believe that marriage between a man and a woman is a first principle that any society has to be founded on.  I believe that children have a right to a mother and a father.  Lots of atheists are against same sex marriage - so no, my opposition to gay marriage is NOT based on my Christianity, but thanks for asking.

Rarely can one statement get as much wrong as the statement used at the beginning of this chart.