Chesterton on Christ and Marriage

The freethinker frequently says that Jesus of Nazareth was a man of his time, even if he was in advance of his time; and that we cannot accept his ethics as final for humanity....Whatever else is true, it is emphatically not true that the ideas of Jesus of Nazareth were suitable to his time, but are no longer suitable to our time. Exactly how suitable they were to his time is perhaps suggested in the end of his story...it is extraordinary how very little there is in the recorded words of Christ that ties him at all to his own time....

So it is in this case of the sacrament of marriage. We may not believe in sacraments, as we may not believe in spirits, but it is quite clear that Christ believed in this sacrament in his own way and not in any current or contemporary way. He certainly did not get his argument against divorce from the Mosaic law or the Roman law or the habits of the Palestinian people. It would appear to his critics then exactly what it appears to his critics now; an arbitrary and transcendental dogma coming from nowhere save in the sense that it came from him. I am not at all concerned here to defend that dogma; the point here is that it is just as easy to defend it now as it was to defend it then. It is an ideal altogether outside time; difficult at any period; impossible at no period. In other words, if anyone says it is what might be expected of a man walking about in that place at that period, we can quite fairly answer that it is much more like what might be the mysterious utterance of a being beyond man, if he walked alive among men. 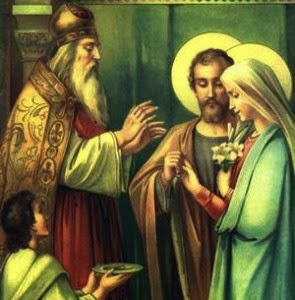 G.K. Chesterton, The Everlasting Man (the chapter title - "The Riddle of the Gospel")
Posted by Father John Hollowell at 6:45 AM