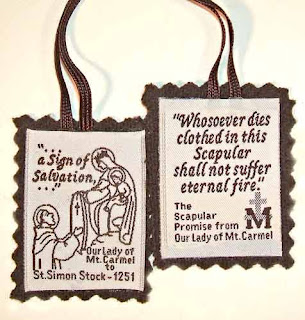 I've been meaning to have a priest bestow a scapular on me for many years. I've been living the promises for about 10 years, but I've just never gotten around to actually wearing the scapular because I can never find a priest to do the ceremony for me when I'm thinking of it. The 7th graders were my inspiration, and yesterday I had my spiritual director bestow a scapular upon me. From the mouth of babes!
Posted by Father John Hollowell at 10:53 AM