If You Are Going to Get a Bible Verse Tattoo... 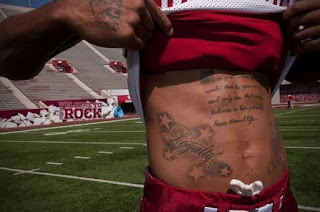 Fridays are a day where I'm trying to find more light-hearted stories. This is definitely one of those!

If you are going to get a tattoo of a Bible verse on your body, you might want to make sure that it isn't heretically wrong-worded! The above photo appeared in Indy's newspaper and features the stomach of IU receiver Damarlo Belcher. The verse tattooed on his stomach is John 3:16. which is supposed to say "for God so loved the world He sent His one and only Son that whoever believes in Him might not perish but have eternal life."

Belcher's tattoo, missing the important words "might not" instead reads "for God so loved the world He sent his one and only son THAT WHOEVER BELIEVES IN HIM PERISH." That would have been quite a different verse and NOT NOT NOT what the authors intended!
Posted by Father John Hollowell at 9:34 AM