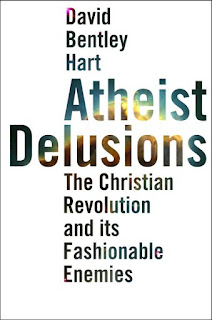 Just finished a FANTASTIC book by David Bentley Hart entitled "Atheist Delusions." The book is Hart's beautiful response to the likes of Richard Dawkins, Christopher Hitchens and others who are making it big right now writing on the "merits" of Atheism.

Hart's best quality is that he doesn't treat the "New Atheists" as worthy intellectual combatants, he treats their theses as they deserve to be treated - as the ramblings of intellectual children. Hart pulls all of this off, however, without sounding arrogant - no small feet.

Here is a great passage from the introduction: "I...suffer from a melancholy sense that, among Christianity's most fervent detractors, there has been a considerable decline in standards in recent years. In its early centuries, the church earned the enmity of genuinely imaginative and civilized critics, such as Celsus and Porphyry, who held the amiable belief that they should make some effort to acquaint themselves with the object of their critique."

The book itself blasts to smithereens, point by point, the major objections to Christianity and the Church that are put forward by the "New Atheists." He spends several early chapters going into the ACTUAL facts and records to easily debunk the shockingly and childishly simplistic summaries that pass for objections to Christianity such as 1) The Church is an enemy of Science and 2) The middle ages were a disastrous time and they were caused by the Church and 3) The "wars of religion" were all about religion and were caused by the Church and 4) the Inquisition was the Church's fault as well.

The historical chapters are to the point and do not drift into excruciating detail as so many historical apologetic works do. The book is not just historical, though. It is a great read and it is HIGHLY RECOMMENDED reading! Thank the good Lord that people like Mr. Hart are on the front lines fighting for good!
Posted by Father John Hollowell at 2:48 PM