What Terror Training Videos Tell Us About Terrorists 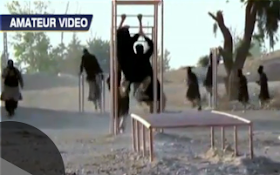 I was watching the telly on my day off, and something that has always made me chuckle on one level actually got me thinking a little bit about terrorism in general.

The above photo is similar to the type of footage we've all seen for decades.  A couple of observations:

1) The "amateur video" tag has always seemed strange.  Does anyone think otherwise when they watch this footage?  I mean I know why American news outlets put the tag on there, but it has always seemed comical to some extent, as if terror organizations were hoping to win an Oscar for cinematography

2) The fact that these goons are out doing push-ups and sit-ups in the desert seems comical as well.  The footage of these "workouts" seems oddly similar to the footage of workouts from the 1930's.

If Richard Simmons got a hold of this footage, he'd probably have a strong case for a lawsuit for stealing his workouts from the '50's.

I could see the following conversation taking place in the middle of the Syrian desert:

Terror training guru "Al Jazeera Bin Laden" - "Okay boys, give me 10 wobbly pushups, then do four squats with your gun over your head, and then let's go hit the monkey bars"

I bring this all up because I think these videos tell us something about terrorism in general - it is never anything other than evil, and evil is always, in the final analysis, pathetic.

As Tolkien said of all those who join up with evil, their attempts are "only a little copy, a child's model or a slave's flattery, of that vast furnace of great power, which suffered no rival, and laughed at flattery, biding its time, secure in its pride and its immeasurable strength."  The devil surely mocks these guys pretending to work out in the desert

These goons don't ever do anything where they need real strength anyway.  They make road side bombs, they blow up innocent people, they never actually fight or use any strength, but yet they "train" and release these "amateur videos"

The Compendium of the Social Doctrine of the Church has some really helpful teachings about terrorism:

Compendium paragraph 513 - "The targets of terrorist attacks are generally places of daily life and not military objectives in the context of a declared war. Terrorism acts and strikes under the veil of darkness, with no regard for any of the rules by which men have always sought to set limits to conflicts."


The Compendium gives us some other useful information on terrorism:

Compendium paragraph 514 - "Terrorism is to be condemned in the most absolute terms. It shows complete contempt for human life and can never be justified"

Compendium paragraph 515 - "It is a profanation and a blasphemy to declare oneself a terrorist in God's name."

"To define as “martyrs” those who die while carrying out terrorist attacks distorts the concept of martyrdom, which is the witness of a person who gives himself up to death rather than deny God and his love. Martyrdom cannot be the act of a person who kills in the name of God."

"No religion may tolerate terrorism and much less preach it."
Father John Hollowell at 7:29 AM
Share