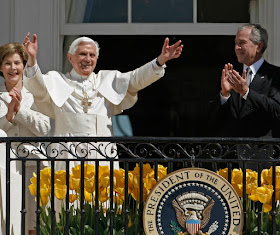 What an amazing time, perhaps one of the great Catholic moments of my lifetime to be sure.  Everyone was giddy with praise for the Holy Father, including the President who, in his typically goofy way, could not stop beaming.  The media even seemed to warm to the Holy Father as the days of his visit passed.  The fact that Pope Benedict met with victims of sexual abuse, and the fact that he spoke about it on the plane ride over certainly seemed to impress even a tough and critical media contingent.  Here now are some of the many memorable quotes and moments. 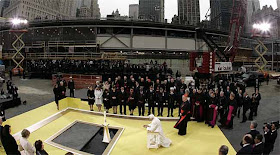 
Meeting with the bishops: "While it is true that this country is marked by a genuinely religious spirit, the subtle influence of secularism can nevertheless color the way people allow their faith to influence their behavior.  Is it consistent to profess our beliefs in church on Sunday, and then during the week to promote business practices or medical procedures contrary to those beliefs?...any tendency to treat religion as a private matter must be resisted."

On Catholic schools and religious education programs: "These need to be maintained and expanded."

To Catholic school educators: "The profound responsibility to lead the young to truth is nothing less than an act of love.  Indeed, the dignity of education lies in fostering the true perfection and happiness of those to be educated."

To the U.N.: "When presented purely in terms of legality, rights risk becoming weak propositions divorced from the ethical and rational dimension which is their foundation and their goal."

"Human rights, of course, must include the right to religious freedom"

To seminarians: "Dear friends, truth is not an imposition.  Nor is it simply a set of rules.  It is a discovery of the One who never fails us; the One whom we can always trust."

"At times, however, we are tempted to close in on ourselves, to doubt the strength of Christ's radiance, to limit the horizon of hope.  Take courage!  Fix your gaze on our saints!"

A homily at St. Pat's in New York: "One of the great disappointments following the Second Vatican Council...has been the experience of division between different groups, different generations...we can only move forward if we turn our gaze together to Christ!...We will then discover the wisdom and strength needed to open ourselves to points of view which may not necessarily confrom to our own ideas or assumptions."

"May you also be the first friend of the poor, the homeless, the stranger, the sick and all who suffer.  Act as beacons of hope." 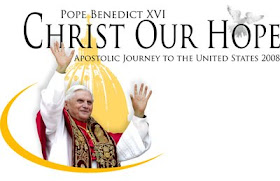